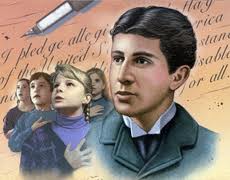 I realize it’s been 48 hours since I pledged I would refrain from all political writings until 2012.
So sue me for flip-floppery. Strip me of my blogging license. Forbid me from updating my Facebook status until all the votes are counted.
There’s been a spontaneous eruption of hysteria across the country and right here in my congressional district and now I raise what is tantamount to a cry for help.
I need someone to stop me from becoming a concerned citizen.
I’m thinking of taking an evening away from my beloved family and/or sudsy bar time to attend a meaningless candidate forum.
I’m thinking of doing this so I can set a record for the most consecutive recitations of The Pledge of Allegiance.
Thanks to -- and wouldn’t you know it? -- Glenn Beck, enthusiastically reciting The Pledge of Allegiance has become another hot button issue and a way for Beck devotees to prove beyond a shadow of a doubt they love America more than those the rest of us who merely mumble along.
It’s become vogue at candidate debates sponsored by the League of Women Voters to ask that The Pledge of Allegiance be recited prior to the forum. It happened the other night right here in my district.
And it happened in Evanston, Illinois, where suspiciously hyphenated moderator Kathy Tate-Bradish said, no, that’s not part of the agenda, thus labeling herself in the eyes of refined Beck followers a communist who must secretly worship Allah.
So they stood up and recited it anyway. Someone, hallelujah, filmed the patriotic outburst.
Beck showed the whole silly kerfuffle, did a little research and here’s what he said on his Monday program. I’d italicize the phrases where he sneers sarcastically, but I fear the passage would be so italicized readers would get see-sick:
“We wanted to look at the moderator, Kathy Tate-Bradish, from the League of Women Voters. Oh, she sounds so neutral and everything. I mean, she’s even neutral on the Pledge, apparently — just a typical woman voter trying to get the truth out. No, not so much — not so much.
“She is on fire for Obama. She is a big-time Obama supporter. In fact, so much so, she’s part of his Organizing for America arm. Hmm. She’s even hosted campaign event in her home in 2007, part of her post on OFA’s, Organizing for America Web site, ‘Hope Action Change.’”
So now she’s getting death threats. The FBI is investigating.
See what happens when you stick your neck out and dare to become a concerned citizen?
This is exactly the kind of thing that could happen to me. Were I the moderator, I’d do everything in my power to keep the meeting moving along crisply so I could rush back and bask in the bosom of my beloved family and/or buddies at the bar.
In fact, if I were hosting the meeting, I’d begin the proceedings by saying, “Look, we’re not going to recite any pledges, neither of these guys will be allowed to make any speeches because we know by their party affiliations just where they stand. So let’s all congratulate ourselves for caring more than your average bear and head home to watch Game 3 of the World Series. I say Giants in six. Meeting adjourned!”
But as I’m opposed to any violence, especially when it’s directed at me, I’m feeling the need to attend a League of Women Voters forum so I can be heard reciting The Pledge of Allegiance.
Over and over again.
I think that would be the best way to inoculate myself against charges I’m squishy on the latest touchstone issue.
So when the spontaneous pledge is recited by fervent patriots and every one sat down satisfied, I’d raise my hand.
“Point of order! I believe The Pledge is so magnificent, I want to say it again. Others can join me or they can sit there in seditious silence while I recite this beautiful oath, this time sung to the tune of ‘The Battle Hymn of the Republic.’ Anna one! Anna two! Anna . . .”
Then I’d say it again. Because if saying something once proves you’re a patriot then saying that same thing 50 times must really prove it.
The furor reminds me of all those years not too long ago when everyone boarding a plane had to say, no, I don’t have a bomb next to my underwear and, no, I didn’t let a swarthy guy named Sayyid pack my suitcase.
Because no one who’d want to blow up an airplane would ever tell a little white lie to an airline clerk.
Really, I’m surprised anyone these days would even want to hold The Pledge of Allegiance in any regard. Its conception is tainted.
Had Beck or his minions bothered to do any research, they would have learned The Pledge was written in 1892 by Baptist minister Francis Bellamy (1855-1931), a man who devoted his life to a philosophy he described as “Christian Socialism.”
It’s true. The Pledge was conceived by a renown leftist (feel free to sneer) who believed in the liberal (sneer) dispersal of community property to benefit even the neediest (sneer) among us.
And what kind of man does that?
Posted by Chris Rodell at 6:35 AM

Love your politics. And your blog...

Well, I don't know who you are or how you found me, but I'm falling in love with you, Averil. Anyone who parachutes in out of the blue to say such nice things (read the hair comment, too), means the world to me.

And I checked out your blog and was blown away. It's beautiful. So many wonderful sentiments.

It's great to make your e-quaintence. I'll look forward to keeping up with your blog and will work harder to keep mine lively and fresh knowing you're taking the time to read mine.

And I hope someone says something to you today that'll make your day the way you've made mine.

You just did. My heart is all a-flutter.

I can't even remember how I found you. You've been bookmarked for quite some time and I just keep coming back for more. You're the bomb.