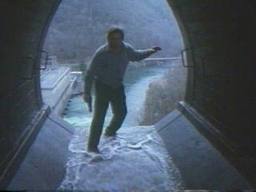 I hate to sound so cantankerous on a Monday but, consarnit, movies have been going down hill ever since 1993.
This occurred to me during a recent visit to the magnificent Kinzua Dam in northwestern Pennsylvania.
A monumental dam like the Kinzua is one of man’s most impressive structures.
As a boy I used to build dams in creeks everywhere. For juvenile engineering purposes, certainly, but also because it let me shout a forbidden-sounding word whenever Ma asked how I’d spent my summer afternoon.
Dam!
That has me wondering if profanity-averse parents insist on referring to one of the seven wonders of the world as the Hoover Darn.
But as my wife and I gazed upon the waters of the Allegheny River gushing through in a raging spray from the Kinzua spillway, we each thought the same thing:
Dr. Richard Kimball: “I did not shoot my wife!”
Lt. Philip Gerard: “I don’t care!”
Yes, we each thought of the riveting scene from “The Fugitive” where the wrongly accused Dr. Kimball, played by the dashing Harrison Ford, leaps off the face of a massive dam to either annihilation or uncertain redemption. At the time we had just discovered re-runs of the original David Janssen series that ran from 1963-67. The shows are still among TV’s most compelling ever.
So, fired with the recollection, we raced home, rented the film and popped it in to show the scene to Josie.
She was mesmerized. True adult entertainment done well is riveting to all ages.
Plus, at the end of it, foul-mouthed Joe Pantoliano steps up behind Gerard to utter an incredulous barnyard profanity that, of course, delighted the surprised 10 year old.
Thus, we take another step in our long march away from endless viewings of “Finding Nemo,” “Madagascar” and the three saccharine versions of “High School Musical” to entertainment emancipation of adult films awash in profanity and violence.
I can’t wait.
When we deem her ready for such viewing, I’m taking her straight back to 1993.
I don’t know what kind of recreational drugs that were consuming in Hollywood some 17 years ago, but I wish they’d become fashionable again.
Here are the top 10 grossing movies from 1993:
I’m not going to play critic on the merits of each of these movies when the market already has. It’s given 1993 a huge thumb’s up. Each of these movies has demonstrated remarkable staying power.
And that’s not all. Here are some other 1993 classics.
There was highbrow: Martin Scorsese’s “The Age of Innocence,” and the highly acclaimed Holly Hunter movie, “The Piano.”
There were two comedies that I consider classics of heartwarming mirth: No one would dispute “Groundhog Day” as a classic, but have you seen “Dave,” the Kevin Kline/Sigourney Weaver movie about a presidential look-alike who is pressed into actual duty? It’s outstanding.
Again, I’m not going to comment on the merits of “Free Willy,” “Grumpy Old Men,” “The Joy Luck Club,” “Wayne’s World II,” “The Nightmare Before Christmas,” or the Schwarzenegger film “The Last Action Hero,” but each of these movies attracted rave reviews and massive audiences.
Two of our favorites from 1994 both starred Clint Eastwood, one you remember, one you probably do not.
“In the Line of Fire” is Eastwood as a decrepit Secret Service agent in pursuit of a homicidal John Malcovich. It’s one of Eastwood’s best.
Lesser known is “A Perfect World,” a wonderfully offbeat film that co-stars Kevin Costner as a down-on-his luck hoodlum who runs away with a young boy. Great film.
The year year also saw the release of the greatest chess movie ever made, “Searching for Bobby Fisher.” There was even a great cowboy movie, “Tombstone.”
Had 1993 been extended by two months one of the greatest movies of all-time would top this list: “The Shawshank Redemption.”
It was the year Bill Clinton took office, the year “The X-Files” and “Dr. Quinn, Medicine Woman” debuted, the year Lorena Bobbitt severed her husband; a gallon of gas cost just $1.05.
But I’ll remember it as maybe the best year Hollywood’s ever had. And I can’t wait to sit my daughters down and show them all these great adult movies.
Am I the kind of father who’d risk a little salty language in the ears of impressionables just for the sake of a really good flick?
Er, dam straight!
Posted by Chris Rodell at 2:58 PM

And the year I graduated high school. Yep, 1993 was a very good year. :) Thanks for the trip down memory lane.

What a great year to graduate! You must have been at the movies all the time. I wish there were more excuses to go more often.

I'm hoping someone will point out a year that rivals or surpasses 1993, but I doubt it's going to happen. Geez, two mighty Spielbergs in one year? A serious one and a popcorn one? Amazing.