Election thoughts from a non-angry voter 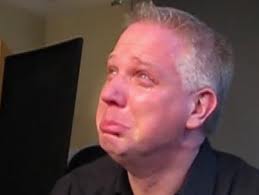 (As noted in comment below, observant reader Emily Suess remarks how the picture I selected makes it look like Beck and I are both staring at the same thing. It's true, I say, it is a deity and He/She is smiling at me and is glaring at Glenn . . . I now return you to your regularly scheduled blog).


We’re nearing the end of the most heated and bitter election cycle since the last one and I’m proud to say I barely care.
The headlines say the electorate is enraged. They hate Obama. They hate Muslims. They hate the media.
Me, I’m mostly at peace because my hatreds are few and many of the things I most hate are getting the absolute crap kicked out of them.
Sure, I wish the Taliban were performing as poorly as the 1-5 Dallas Cowboys, but these things take time. And it’s impossible to diminish just how heartwarming the decline of the Cowboys is to me.
I’ve somehow managed to skate through this entire tumultuous election cycle without engaging in one political argument; any time someone’s tried to goad me into one, I’ve dismissed them with sound reasoning.
I say, “Look, moron, there’s nothing you can say to change my opinion and as you seem so resistant to logic it would be a waste of my time to even bother trying to change yours. So let’s just sip our beers and discuss the endearing mysteries of women and the happy things we do that make them hate us so.”
I haven’t even stooped to political blogging although part of that is for strategic reasons. I know if my readership is anything like the general public then 50 percent of them will be infuriated if I write something kindly about the Democrats and 50 percent of them will be enraged if I say a Republican surprised me by doing something sensible.
That means I’d risk losing half my readers and that would leave me with, I think, just 4.5 of them.
The polls say the Republicans are going to sweep to power in the House and stand of chance of seizing the Senate.
This should make me, a man so liberal he even loves conservatives, as weepy as Glenn Beck when he considers things like apple pie.
But even if that happens, it won’t bother me one bit. Maybe because I believe the loonier elements of the right wing fringe will be exposed by having to govern and that will doom the Republicans for 2012.
Or maybe I spent all my anger during the Bush/Cheney years. I swear, I woke up every day swearing.
I swore it was a tragic mistake to invade Iraq (I was correct).
I swore cutting taxes to score cheap political points while waging two expensive wars would lead to financial ruin (I was correct).
I swore using wedge issues like gay marriage, stem cell research and Terri Schiavo to rally your conservative base and demonize your opponents would lay waste to decent political discourse for years to come (I was correct).
Right-leaning friends ask if I regret my support for President Obama.
Not for a minute.
The most sensible thing Bush ever did in office was betray his every conservative and capitalist instinct and launch the TARP program. I believe the experts who say that helped us dodge an historic bullet.
Obama continued the drastic steps needed to stave off chaos. It wasn’t easy. It wasn’t popular. It had to be done. Dubya thought so.
Obama’s accomplished much in a hysterical political climate where a powerful arm of the mainstream media still hints he’s a Muslim tourist pallin’ ‘round with terrorists bent on overturning the U.S. Constitution.
Even when G.W. Bush was shredding the actual constitution, I never considered him anything as sinister as what Fox News daily asserts Obama is.
I didn’t think he was evil. I just thought he was stupid (I was correct).
Anyone who thought the historic mess the previous administration left behind could be cleaned up in two jiffy years was crazy.
The news today is pessimistic economists are surprised by a sharp drop in the number of unemployment claims. It is the second straight drop and a clear sign the dreadful job market is recovering.
So come Tuesday I’ll vote the straight Democratic ticket. I’ll do it twice if I can get away with it.
I do this to counter those who’ll be voting the straight Republican ticket to counter guys like me who vote the straight Democratic ticket to counter them, etc.
But I’m convinced the momentous measures taken the past two years have pulled us from the brink.
And now it’ll be months before I feel compelled to write another political post.
Unless I’m afforded an opportunity to gloat.
I swear.
Tweet of the week from twitter.com/8days2amish.com: "Many political races are incredibly tight. They are neck and redneck."
Posted by Chris Rodell at 1:45 PM

You (in your profile pic) and Glenn appear to be looking up at the same thing. I wonder what it could be. :)

Now, THAT's funny, Emily! Very observant of you. I can only speculate we're looking at the same deity and He/She is smiling at me and is looking very pissed at Glenn.

Thanks for cracking me up.

As long as the GHOUL Harry Reid and the Witch Pelosi are knocked out of power your favorite Muslim will have to pretend everyday that it is halloween and put on his fake "I Luv the American Face" he wore to get elected the first time...I wish he would come back to my church so I can continue to fill him with the radical thoughts I instilled in him for 20 years. GoD_ _ _ AMERICA
Jeremiah Wright

You should write a biography about my congressman...dennis kucinich.

Better yet a graphic novel about him. It could be a quirky, National Enquirer type expose.

Hollywood stars that love him and finance his campains in Ohio, even though they have never been here...(quirky)

List's Polka, Parma and Post Office naming as his higher acheivements as a U.S. congressman...(quirky)

Bucks the tide for no reason...(quirky)

Very far left, and alway correct.... (quirky, like you)

You could call it...Mistaken by the Lake.

Take a deep breath, Tuesday will be tough for everyone left except you and dennis.

Thanks, Mark, but I'm not planning on caring one way or the other. I'm Zen-like in my peace ever since Bush slammed the Bible on inauguration day.

Man, that man pissed me off.