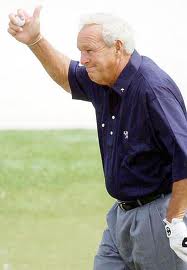 In honor of the great Arnold Palmer's birthday, I'm re-running the post I wrote about him last year on his 80th birthday. I realize I'm lapsing into a pattern of re-running posts but as I never take a blogging vacation I hope you readers will understand.

If you don't be sure not to read September 29 when I intend to re-run last year's blog commemorating the birthday of Larry Linville.
And I in no way mean to equate the great Arnold Palmer with the grating Major Frank Burns of M*A*S*H 4077.
Have a great weekend and happy birthday, Mr. Palmer!

Some admiring jokers started www.chucknorrisfacts.com to put a farcical spin on the B-movie actor’s fantasy exploits. Example: “When Chuck Norris does a push up, he isn’t elevating himself, he’s pushing the earth down.”
It’s a hilarious bit of make believe.
In 2005, I was asked to do the daily timeline project on www.ArnoldPalmer.com and can now conclude what should be obvious to any fair-minded observer. And that is this:
The real Arnold Palmer makes even the make-believe Chuck Norris look like a candy-assed sissy.
Today is Palmer’s 80th birthday.
He declined an invitation to an interesting party this evening where some of his friends were going to salute him just for being such a great guy.
“I wish I could attend,” he told reporters, “but I’ve got some other things planned and I’ll be pretty busy that night. Sorry, I just can’t be there.”
The event? The opening night kickoff of the 2009 NFL season at Heinz Field. The Pittsburgh Steelers wanted to honor Palmer on one of the biggest nights of the year. They wanted to have more than 65,000 fans cheer him, watch video highlights of his career, and listen to heady praise of his lavish philanthropy.
But he has something better to do.
There’s an astounding humility in that polite little no thanks. I’m guessing he’s going have a small party with friends at Latrobe Country Club, but how many of our celebrities could resist the opportunity to have their already-massive egos stoked by having a crowd of that size blow kisses at them?
All America should feel better about itself today knowing we produced a man like Palmer and that he continues to thrive and inspire.
Unlike Norris, who’s becoming more famous for popping off on far right causes that embarrass even mainstream conservatives, facts about Palmer are, well, facts.
I know this because for two years it was my job to go through more than 50 years of newspaper and magazine clippings about Palmer and note what he did each and every day of his life.
As of today, the Timeline has more than 1,200 noteworthy items.
As everyone knows, he is one of the greatest golfers who’s ever lived. But a charming alchemy of small-town grit, old-fashioned good manners and heaven-sent good fortune have made his a life unique in American history. Many presidents may admire Sandy Koufax or Cal Ripken, but that doesn’t mean they’ll ever invite them to the White House to play catch.
But it’s different with golfers. And it’s different still with Palmer. That helps explain why former President Dwight D. Eisenhower showed up at Palmer’s house to surprise him on his 37th birthday on this day in 1966, and why Bill Clinton told biographers in 2000 that one of the greatest perks of being POTUS is the “opportunity to play golf with Arnold Palmer.”
An accomplished pilot who still flies his own jet, Palmer set an aviation world record on May 19, 1976, when he circumnavigated the globe in a Lear 36 in less than 58 hours.
Kirk Douglas said in 1970 that no one -- not Sinatra, John Wayne or Ronald Reagan -- has more charisma than Palmer.
He has a popular drink, The Arnold Palmer (half lemonade/half iced tea), named after him and the concoction is recognized by hip Manhattan waitresses who have no idea who Arnold Palmer is. In addition to the drink, two entire hospitals, a national golf museum, a regional airport, a PGA golf tournament, fancy club rooms and charity initiatives and scholarships too numerous to tally bear the name Arnold Palmer.
John Paul Newport of the Wall Street Journal wrote this week, “Lasting popularity of Palmer’s magnitude simply cannot be explained.”
It’s a safe bet that today Palmer will celebrate his birthday by playing some golf, laughing with some children, hugging loved ones, joking with buddies, being bold and doing something to help someone needy.
Let’s all try and join him in doing just some of the same. It’s life the way it ought to be lived.
All, but you, Chuck Norris.
You can just sit home in the dark and maybe dream about what it would be like to be a real man.
Posted by Chris Rodell at 8:07 AM