Don't hate me 'cause I'm beautiful 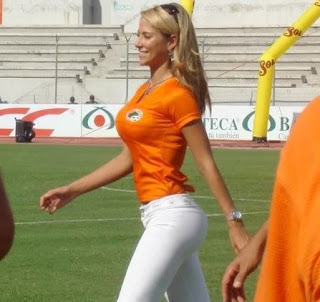 
For years, it was my habit to approach beautiful women in dark bars and ask them straight-faced and in my most sincere voice, “Was it as difficult for you growing up beautiful . . . as it was for me?”
It was this question that led me to conclude that beautiful women share one other appealing characteristic: They love to laugh. Hard.
I’m maybe the last sensitive guy on earth who understands that, yes, it is difficult for a woman to be born beautiful.
Certainly, beautiful women have their god-given advantages.
They can sleep with any shallow man they choose. They can coast through life on their dazzling smiles. Doors closed to the homely swing wide open for them.
Wait a second. Which side am I arguing?
Oh, right.
It ain’t easy being beautiful.
I mention all this because of the furor over the way members of the New York Jets treated bombshell Mexican reporter Ines Sainz in the locker room. Apparently, some of the Jets whistled and made adolescent comments when she was interviewing QB Mark Sanchez.
It was so bad Jets owner Woody Johnson personally sought out the comely Sainz to apologize for his team’s inappropriate behavior -- and, yes, the bones in my fingers are practically splintering to keep from typing a lame joke about a man named Woody Johnson thrusting himself into a discussion about sexual harassment.
Woody Johnson! It’s the greatest unintentional porn name since Andy Roddick.
This set off a predictable round of hand-wringing about whether Sainz’s fantastic looks, tight outfits and playful questions provoke such a reaction in a room full of naked, smelly men who can’t catch poorly thrown passes or skillfully block men like Ray Lewis.
First of all, let’s consider Sainz. I saw her picture and immediately made a snap judgement based purely on her looks. It was: Not my type.
She looks like someone Tiger Woods would date, which means she looks like a hooker or someone who’s undergone extensive plastic surgery to make people think she’s a hooker.
Then I heard her being interviewed on one of the morning shows and did an about face. She seemed comfortable with her beauty and didn’t take herself too seriously.
I appreciate that in a woman. I’m married to a lovely woman who is shy about her beauty. It’s very sweet but like a lot of pretty women the fair Valerie lacks confidence in her looks.
I wish she could see herself as I’ve always seen her. She’d be blown away.
Me, I don’t suffer from such trifling modesty.
Believe me, you don’t want to spend a day mirror shopping with a guy like me.
It’s clear Sainz is the kind of woman who can handle herself in any social situation and that puts the 300-pound meatheads who play professional football at a disadvantage.
I tried to think what I’d do if I was naked, in that locker room and had a status and physique that might be attractive to a woman who in 1997 was Miss Universe.
Here’s what I came up with: Nothing.
I’ve been in locker rooms as player, coach and reporter for huge chunks of my life. It’s not a sexy atmosphere.
If Sainz was in any of them, sure, I’d note to myself her beauty, but I wouldn’t act on it. I wouldn’t clown around and make junior high jokes about her. It’s just not the place for such hi jinx.
Heck, that’s what blogs like this are for.
That some Jets players acted the way they did diminishes them more than even their sloppy Monday night loss to the Baltimore Ravens.
You mean professional football players in New York City needs to making leering comments at busty reporters to get their jollies?
What? Have all the groupies simultaneously danced back to their stripper poles?
I just don’t get it.
Maybe I’m just stupid. That’s yet another pejorative ascribed to women who labor under the burdens of being born beautiful.
People just automatically assume beautiful people are balloon-headed dunces.
Happens to me all the time.

Is there such a thing as having an ass that is too perfect?

Lastly, console yourself with the fact that Inés Sáinz does not have a page in Wikipedia, although my guess is that ass of hers is going to have one soon. And about every member of the New York Jets has one. Go figure.

Yeah, I couldn't believe how little there was about her on the web and zip on Wikipedia.

Another interesting blog Chris. My daughter has been doing sports reporting for 4 years. This story has lead to many discussions in our house. I always enjoy reading your blog. Thanks.

Good for your daughter, soapymom, and thanks so much for taking the time to read and say hello. I hope the incident makes things easier for her in what I'm sure can sometimes be a challenging environment.

I'd advise her not to take any crap from anybody. Ever!

I hope, as a new friendly, you'll take the time to post your no-obligation picture in my followers box, refer to other friendlies when you find it worthy . . . and keep on reading!

Chris, Sorry I didn't realize that it didn't show my name. It is Debbie, in Florida. Been reading for a while and I always enjoy it. Thanks.

I wonder what kind of press we would see if roles were reversed and a male reporter - wearing a pair of ass-huggers - entered a woman's locker room.

Yes, Erin, and I'm just the guy to do it! That would be fun. It sounds like something ripe for Sacha Baron Cohen.

Thanks for reading and writing!