Movin' next to the Palins 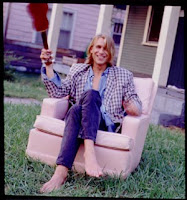 It took me 10 seconds to come up with 10 reasons to tell my agent to tell my publisher why I wouldn’t be moving in next door to Sarah Palin for purposes of writing a six-figure best seller on her.

The top three are: I don’t have an agent; I don’t have a publisher; and no one’s foolish enough to offer me a six-figure advance on something I’d never finish. I couldn’t read a book about Sarah Palin, much less write one.

Reasons four through 10 are all some variation of the theme: I don’t want any neighbors. In my experience, the bad and the creepy have far outnumbered the kindly and good.

We right now have a vacancy next door and I tremble at what might move in. Meth techs? Doomsday rapture cultists? Pit bull breeders?

The widow Josephine was probably the best neighbor ever. We lived next to her from 1992-2007 before we moved up into the more secluded woods.

She was generous. We had free reign to raid her bountiful garden whenever we needed fixings. I’m convinced the whole Third World could have shown up unannounced for dinner, she’d have fed them up full and then stuck her head out the kitchen door and said, “Anyone have room for pie?”

She was interesting. She surprised me one time when she said she used to watch hours and hours of televised golf. Then she about shocked all the hairs off my head when she told me why.

She used to spend hours and hours with her hands in Arnold Palmer’s pants.

“They called me recently to see if I was still available for hire, but I told them I didn’t do that kind of thing anymore,” she said.

She was his seamstress.

She made a lovely heirloom quilt for our daughter when she was born. She was just so sweet and loving that I’m sure there’ll never be another neighbor so perfect.

It would be a pleasure to be assigned to live next to her for the purposes of writing a book.

Not so with the Palin brood. Already, the Mama Grizzly’s flair for the dramatic has gotten in the way of being neighborly. Instead of welcoming McGinness with cookies and smiles -- and, guaranteed, we’ll do that for whatever meth chef/pit bull owning madman who moves in next to us -- she immediately played the victim.

Then she sent surly Todd over to bully and bitch.

Then she built an enormous fence obscuring his view of them and -- who knows? -- maybe her view of Russia.

I don’t know what McGinniss is thinking. Uptight people like that make for awful neighbors.

I’ll bet if sufficiently motivated, I could come up as compelling a story as he eventually will with just two weeks at the Wasilla Best Western.

Of course, that’s not fair to McGuinniss. He’s Holy Cross elite and didn’t cut his reporting teeth, as I did, at National Enquirer.

But it got me to thinking who, in all America, I’d like to live next door to for the purposes of writing a tell-all book.

This week I found the answer.

He’s a hilarious singer-songwriter in Nashville, a now flood beleaguered town I love.

He’s the kind of guy who’d probably be furious that America is resorting to generic game shows to determine musical popularity if he wasn’t always so pleasantly stoned.

One recent song, “America’s Favorite Pastime,” is a deadpan homage to the day Pittsburgh Pirate Doc Ellis pitched a no-hitter on LSD.

He just released a flood benefit single “Come Up and See Me Sometime.” The accompanying video shows him and a rag tag band whooping it up amidst snippets all these great East Nashville bars, many of which I used to frequent when I lived there from 1985-1989.

There are beguiling flashes of backyard parties that show the gang sitting around sipping wine, playing fiddles, mandolins and banjos. I could practically smell the marijuana clouds wafting through my computer screen.

For reasons that have nothing to do with contact highs, it would be impossible to live next door to such a happy scene and remain burdened by life’s petty cares or the gnaw of self-inflated ambitions.

Hell, forget about me or McGuinness moving in next to Palin.

Let’s move the Palins next door to Snider.

I’m sure, at the very least, Levi Johnson would enjoy visiting more.
Posted by Chris Rodell at 1:15 PM