I'm back and a good man's gone 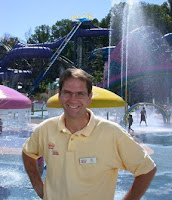 I’m back from an unannounced six-day blogging vacation while I took the family on a summer frolic.

It was unannounced for security reasons. We’ve all seen stories about crafty crooks who prowl the internet for clues that someone is going away.

I consider it more disparaging evidence of man’s decline that today’s crooks dawdle around on Facebook rather than sticking a gun in someone’s ribs the way honest crooks always used to.

But I felt bad about it all week. I felt it was an affront to my regular readers.

I worried that they may have felt something happened to me, that maybe I’d been injured in a freak typing accident or that maybe I’d, egads, found a real wage-earning job.

Let me assure you, that’s never going to happen.

Certainly, I don’t think I have any readers who would use the information that I was away to break into my home. First of all, my readers are no fools. They know precisely how impoverished I am.

Not many people are going to go out of their way to rob a man who boasts that his prize possession is a beer can collection he’s tended since the fourth grade.

I think my readers are uniformly charitable, well-read, make informed decisions based on facts, like Pina Coladas and getting caught in the rain.

But, boy, would I have felt stupid explaining to police how I’d given daily updates about our distant whereabouts.

The blog’s become such a habit that if I don’t post at least 750 words three times a week, I feel like I’m shirking my commitments.

That, of course, is insane. It would be like my kid feeling guilty over not playing enough with her Care Bears.

Yet, as I strolled through several midwest playgrounds, the feeling did persist. I’d see taxpayer-funded highway workers mowing already trim grass and feel the need to expound on the waste.

I’d think how the relationship between me and the caddie the pro shop had assigned me was not unlike that between a hooker and her John and reflexively want to reach for my laptop.

I’d see so many awful tattoos on so many misshapen bodies and think maybe I should become a tattoo artist.

So did my wife.

The only thing I said during the entire eight-hour trip home that wasn’t greeted with exasperated groans of impatience was, “We’re home!”

So I’m going to try and get to all that in the next few days, but first we need to engage in some mourning.

Will Koch, 48, died Monday at his home in Santa Claus, Indiana. He was found dead in his pool from what his family believes were complications from the Type 1 diabetes he’d dealt with since college.

To me, it was like hearing Mr. Rogers had died before anyone had a chance to get to really know the grace and joy of Fred Rogers.

Koch was for 20 years the president of Holiday World and Splashin’ Safari and the outstanding successor to his father and grandfather who founded the world’s first theme park, one that predates Disney World by nine year. The park is divided into four sections that celebrate Christmas, Thanksgiving, Halloween and the Fourth of July, a traditional lineup that makes brawny amusement park snobs snicker.

By poignant coincidence, we were there Tuesday and Wednesday, the day before he was buried. The tears of the employees who beloved him were never far from the surface.

I first met him in 1996 when National Enquirer asked me to travel to southern Indiana to do a Christmas story about the town called Santa Claus. Each December, the normally sleepy Santa Claus Post Office, ZIP code 47579, goes from handling 3,000 pieces of mail a day to more than 50,000. This Christmas alone, postal workers will help deliver more than 500,000 pieces of mail from all over the world.

Little did I know it at the time, but Koch was in the midst of turning the quirky little park into a colossus.

I’d write about the place every couple of years for various newspapers, but didn’t have an opportunity to return until 2008 when I accepted a longstanding invitation to bring my family.

Koch and park spokeswoman Paula Werne met us at the front gate and thanked me for all the coverage over the years. My impression of him was that he was warm, mirthful and that when he knelt down to tell my daughters that he hoped they had a wonderful time at his park, by God, he really meant it.

My impression of the park was more euphoric. When an overseas airline magazine magazine asked me to do a story about the must-visit amusement parks in the entire world, I told them they had to include Holiday World.

They’d never heard of it.

I told them that the it edged out all the Disneys and the Six Flags and a host of better known others in 2005 when the International Association of Amusement Parks and Attractions organization awarded it Best Park, the smallest park to ever earn the designation.

I told them it was a coaster lovers’ paradise and that Amusement Today declared The Voyage the world’s number one wooden coaster for the past three years, and that the same magazine gives it top honors for cleanest and friendliest park.

I told them that Splashin’ Safari this year opened the $5.5 million Wildebeest, the world’s longest water coaster and a fitting companion to Pilgrim’s Plunge, the world’s tallest water slide.

I told them Forbes Magazine included it on its 2006 list of the top 10 amusement parks in the world.

They agreed it needed to be included.

Those are worthy credentials all, but what impressed me most is that in 2008, Koch decided it would give away for free sunscreen and soda.

Scattered throughout the park are sunscreen stations and Pepsi oases that allow thirsty families to drink as much free Pepsi products as they want all day long.

In a day where ballparks and movie theaters charge $4.50 for 12 flat ounces of soda, it’s a flabbergasting gesture.

Try and get there one day. You won’t regret it. This week was our second visit in three years and if we don’t go back by 2012, our kids will scream neglect.

We can only hope heaven’s all it’s cracked up to be, but I can’t help but think that in two years or so, the souls of the saints will be greeting Will Koch on the golden sidewalks and saying, “Hey, thanks so much for all you’ve done around here. You’ve really made this place so much more fun and friendly.”

Countless people have been saying that here on earth for years.

A married father of three, he will be missed.
Posted by Chris Rodell at 3:03 PM

Glad you're back, sorry he's gone.

Yeah, I understand your silence regarding the trip. Man's creativity in finding new and better ways to rip off fellow man is amazing, in a sad sort of way, isn't it?

That was a touching story. Thank you. I will have to make plans to take the kids there. But I won't update my facebook status until we get back home. :)

Yes, Keith, you'd think with that much ingenuity they could earn a decent living the proper way. It is strange that we have to worry about that sort of thing.

And thanks, Tia! You and your kids will love Santa Claus. It's a special little place.

Best to both of you!