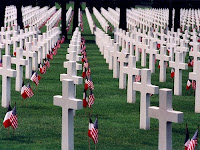 It is said that God never gives us more than we can handle. If that is so, then God must think I’m a sissy.

If He didn’t before, He sure does now.

Because on this Memorial Day weekend I’m seeking a Purple Heart from my golf buddies because of the round-ruining injury I sustained prior to Thursday’s afternoon hookie match.

I have a real spring in my step the days I’ve cleared for golf. I look forward to being out with my buddies in the sunshine, talking sports, drinking a few beers and trying to deploy a disruptive fart timed to coincide with an opponent’s backswing.

But I also want to play well. That’s why I was extra excited on Thursday. I’d played great the last time out. I’d putted well, was crisp around the greens and really stung the ball off the tee.

Now I feel bad for the ball. Because I know how much it hurts to get really stung.

Excepting self-inflicted hangovers, my life is so painfree that my body is confused when it’s surprised by the sensation.

That’s what happened as I was leaving my office to meet Ron in the parking lot. The ceiling light by the door has been broken for months so I couldn’t see the bee on the door knob.

Had I seen it, I doubt it would have registered anyway. I’d have likely dismissed seeing one relaxing on the door knob as an hallucination, and I welcome those breaks in reality’s tedium.

But there in the dark, I grasped the knob and it felt like someone evil took a pain-filled syringe and injected it into the tender webbing between my left thumb and index finger.

It hurt like hell, but mostly I felt stunned disbelief.

How was it part of God’s plan to ruin my round of golf by having my left hand bee stung? It was as confounding to me as why He’s wanted to keep me so poor for so long.

A bee sting made no sense. There in the dark, I thought maybe it was a metal splinter.

Either way, I couldn’t tell my golf buddies and had to freeze out the pain. We’re stoics when it comes to “feelings.” Any complaint is dismissed as a preemptive excuse for all the bad golf that’s bound to come one way or another.

It would be different if I golfed with women. They’d be sympathetic, coddle me and say things like, “There, there, baby. It’ll be all right.”

But golfing with women would radically alter the enjoyment of the day. Profanity would be frowned upon. Instead of sports, I’d have to talk about the kids and pretend I remember things like their names and their interests. As for farts, well, it would be out the window with that noxious mischief.

I encourage women to golf, just not with me.

I come by that chauvinism honestly. It’s the way Dad raised his boys. He said GOLF stood for: Gentleman Only, Ladies Forbidden.

Oddly, in his last year, he completely reversed that sporting misogyny and enjoyed golfing with women. I think the reason was the old man needed someone he could outdrive.

Either way, he must have realized his betrayal and a year after he began golfing with skirts, he did the honorable thing and just up and died.

I can’t say I felt like dying on Thursday, but I was clearly off my game. I hardly sipped a beer. Played lousy and came home early and sober. The pain I’d fought to ignore all day overcame me when I got home and saw the hand -- a golf glove had concealed it all day -- all red and swollen to the size of catcher’s mitt.

I’d found the spent, crunchy bee carcass right below the door know where it inflicted its last fatal act of menace.

When you think about it, the bee differs little from an Islamic terrorist. It gives its life to mindlessly kill something others love, in this case a day of golf and drinking.

And what motivates the worker bee? Maybe some fundamentalist bee cleric tells it a heaven awaits it where instead of it always serving the queen, a hive full of voluptuous virgin queens await to service it in bee paradise.

Odd, isn’t it, that I can take something as simple as a golfer being stung by a bee and equate it to the life-and-death struggle our brave soldiers face every day. On Memorial Day, no less.

Really, guys like me ought to just say thanks and then buzz off.

Thank you, vets.
Posted by Chris Rodell at 2:14 PM

I've never had any interest in golf outside the movie Caddyshack, but I also never knew deploying disruptive farts was involved. Hmmm.

Yes, Keith, there are a 1,000 adolescent distractions centered around a day of golf. Lots of fun. Lots of great golf in Albuquerque, too!

Poor bee. That was hysterical. Many thanks, Chris.

Thanks Nancy! So glad you enjoyed it.