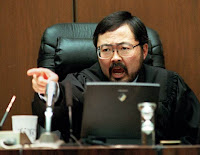 Hooray for me! After months of desperation, something I’ve been dreaming and praying about finally happened on Tuesday. Yep, I got a job, important county work.

Yesterday, a distinguished judge addressed me and about 120 fellow Westmoreland County citizens. He told us how we were there to provide the spiritual backbone to the best judicial system every devised by mankind. Fortunes and lives would rise and fall on the collective wisdom we were about to bestow.

Most people would rather fake their own death before accepting jury duty. Not me. I couldn’t wait. The night before I did a little home barbering, picked out on a nice shirt and coat and took steps to ensure I wouldn’t be too hungover to function for the important first day.

Of course, most people have jobs and obligations. They are engaged in productive lives. Me, I haven’t worked in about five months. To be honest, I haven’t done real work since I turned in my sauce-stained apron down at the old Pizza Hut.

I’m in a sort of transitional phase. I’m trying to move beyond writing magazine articles to becoming a full-fledged la-de-dah author. I’m trying to get my satirical novel published. So instead of spending all my time getting paid to write magazine articles, I’ve been spending my time writing painstaking queries to agents who respond with terse, soul-wounding rejection letters.

Nine dollars a day would seem like a gaudy windfall.

Everyone jokes about jury duty, but it’s a truly ennobling experience. It gives me the same sort of patriotic jolt I get when I walk into a voting booth. Or at least it used to be called a voting booth. These days it’s more of an exposed sort of an electronic voting station that always makes me suspicious either my vote’s not going to count or some angry Republican bully’s going to sneak up from behind and bash me with his briefcase.

It was fun to watch the other prospective jurors walk in. There were so many friendly faces. I made snap judgments about all of them and uniformly came down with positive reactions. Seven hours of confined tedium later, some of those judgments would shift.

And the tedium began almost instantly. I was not among the group of 50 that was called to the courtroom for questioning. That was fine with me. I had my laptop, The New York Times and was eager to dive into Jere Longman’s outstanding book, “Among the Heroes,” about the randomly assembled group of strangers who on September 11 deliberately crashed the hijacked United Flight 93 into a Shanksville field just 40 minutes from my western Pennsylvania home.

The choice of Longman’s book was deliberate. The heroic story of Flight 93 restores my faith whenever I feel humanity is being disparaged. And in the jury room we, too, were a random group of strangers perhaps capable of greatness. We weren’t there to fight terrorists. Our battle was with boredom.

“You know they should have a bowling alley in here to keep people from going crazy,” one woman said.

A bearded man in bib overalls suggested a dart board. A guy in a Cosby sweater lamented that he didn’t bring along some Trivial Pursuit cards.

It was starting to sound like a fine tavern for sissy teetotalers.

I thought briefly about opening up my laptop and entertaining the folks by reading aloud some of of my recent blog posts. But I’m not that kind of extrovert and if I were one day I’d eventually realize it and be forced to throw myself in front of speeding bus.

I was really enjoying having nothing to do but read. It reminded of the Lord Babington Macaulay’s great quote: “I’d rather be a poor man confined to an attic with plenty of books than a king who didn’t love to read.”

Of course, anytime you’re immersed in that vast a sea of humanity you’re bound to run into a crappie or two, and I’m not talking about the freshwater sport fish.

This one wore a Steeler sweatshirt and kept up a running commentary about the soap opera that played on the TV in the front of the big room. He followed each lewd comment with a nervous staccato laugh that sounded like someone had spilled a bucket of empty beer cans down a long flight of stairs.

The guy wouldn’t shut up. Had he been on the ill-fated Flight 93, I wondered if the heroes would have turned on him before dealing with the terrorists. I would have argued that it should have been the priority.

Finally at 4 p.m. the jury commissioner came in, thanked us and said we wouldn’t be needed. We could all go home.

I was being fired!

I went up and pleaded with her to let me come back the next day.

“You’re serious? You really want to come back?”

Yes, I think this is something I could really be good at. I’m a good listener, I didn’t doze off once or try and kill that loud-mouthed jerk in the Steeler jersey.

“Your turn will come again, sir. We’ll let you know.”

Will it be later this month? I’m sure I’ll be available.

Still, it had been a great day. I’d done my civic duty without incident. The government recognized my service and will pay me $9.

Minus the $6 it cost to park, that leaves me with a tidy $3 profit.

The urge to splurge is impossible to resist.

Tonight, I’m taking the girls out for gumballs!
Posted by Chris Rodell at 12:26 PM