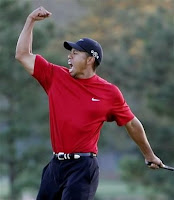 My brother Eric correctly predicted exactly what was going to happen with Tiger Woods on the 72nd hole at Bay Hill on Sunday.

Not that he’d make the winning putt. That was too obvious. Tiger’s ahead of pace to become the greatest golfer of all time. He wins nearly one out of every three tournaments in which he enters.

The greatest threat to Tiger’s relentless march to greatness isn’t current challengers or surging young golfers like Anthony Kim or Rory McIlroy. By most historical standards, Tiger should have 10 years of prime golfing longevity left in him where he’ll be untouchable.

The greatest threat to him is that he keeps winning so frequently and so exuberantly that he blows his knee out after sinking a winning putt. And -- Step. Step. Twist. -- it could happen. If it does, it’s going to be like watching a thoroughbred break an ankle coming down the homestretch at Churchill Downs with a 33-length lead on the rest of the feckless field.

Tiger’s the only golfer in history who ought to begin practicing what he does when he wins. He needs a new signature celebration, one that is stationary. He’s expending more reckless energy celebrating his victories than he ever does attaining them.

His exuberance is such that he rarely observes a ball as it routinely rolls into the hole. He’s fist pumped at Muirfield Village. He’s gunned it down with a finger pistol during his memorable win over Bob May at Valhalla, and he’s generally exhalted in ways that would have historic stoics like Ben Hogan shaking his head with scolding disdain.

But in the last couple of years his most euphoric dance step has become as predictable as the result. He’s textbook as the ball leaves the putter. Then as the putt rolls within five feet of the cup he goes into a dance step that could be called the Tiger Beat.

He begins to back away from the cup with a little shuffle (well-bred etiquette, too, as he doesn’t risk dancing on his opponent’s line). He takes another step, this one a more emphatic march to launch sequence. Then as the ball dives into the cup, he turns tornado and on that recently repaired left knee torques skyward with an awkward oomph that reminds us of why Stanford friends nicknamed him “Urkel.”

Unless there’s some future scandal involving illicit tapes and a nasty divorce, it’s the only time any of us will ever see Tiger when he’s absolutely out of control.

For the good of his career longevity, Tiger needs to practice what he’ll do the next time a winning putt leads to an on-course climax.

To be fair, those kinds of out-of-control moments never get boring or routine for the rest of us. But we’re only human.

The world needs more Urkels! Thanks for stopping by my blog. I'll be back here again soon.

PS
Is advanced age robbing me of my vision? Can't find a Follow widget here anywhere.