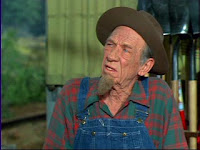 It was the greatest letter I’ve ever received and it was nearly lost forever because, with the exception of one shining superstar, my home is in Hooterville.

It was a personal letter from one of the most famous people on the planet. It said he looks forward to reading something I write every day and he just wanted to let me know how much he enjoys my work.

It was sent December 23, 2008, and it finally landed in my hands yesterday. It took 93 days to travel two miles.

Hooterville was the fictional site of the still uproarious TV Land staple, “Green Acres.” It was a town populated by dim wits who forever are causing vein-popping consternation for erstwhile attorney Oliver Wendell Douglas, the naive farmer who ditched lawyering in New York for the bucolic life among the country rubes.

Old Mail Day was the festival when Hootervillians gathered to get the old mail that Sam had misplaced or found when he was cleaning behind the pickle barrel. Many once-important pieces of mail were distributed. I remember Fred Ziffel was stunned to read he’d been drafted to serve -- in World War I.

I thought about that episode when my good friend Dave said he had a letter for me. Dave owns the ground floor tavern and rents me for cheap one of the three second floor apartments above his business. It’s where I keep a shabby little office and am always handy if the bar runs short of thirsty customers.

He asked if I was missing any mail. I told him I don’t receive any mail here. All my mail goes to my home address.

“Well, you got one letter here that was dated December 23. Your idiot neighbor upstairs got it by mistake and never bothered to give it over.”

His harsh assessment of my neighbor John was correct. He’s an absolute idiot. He’d fit right in on “Green Acres.” Arnold Ziffel could wear an “I’m with Stupid” shirt around John and no one would dispute the pig.

Still, John and I are on good terms. If I restricted my friendships and conversations to only intelligent people it would be a very lonely existence and I’d have to stop even talking to myself. It was strange that he hadn’t just given it to me.

“He said he felt bad. He found it under a stack of old papers he was about to throw away. It’s a letter from Arnold Palmer.”

Well, you could have knocked me off my bar stool with a feather -- and I was just sipping my first beer so don’t factor inebriation into the equation. I was stunned.

I looked up across the bar and there on the television was Arnold Palmer himself. By the most surreal of coincidences, a 93-day-old letter from Palmer was delivered to me while we were watching Arnold Palmer being interviewed on television about the Arnold Palmer Invitational golf tournament being played this week at Bay Hill Club in Orlando.

For 10 years I’ve been doing the Amazing But True Golf Facts page-a-day calendars. Every Christmas, I’d always take a few up to Palmer’s long-time assistant, the great Doc Giffin. I never dared try to talk to Palmer himself, even though Doc told me the boss was an enthusiastic reader of my little calendar pages.

I was doing a lot of golf writing in 2005 when Doc asked me to do a major website project working with Palmer web wizard Scott Curry. We were to go though decades of old newspaper clips detailing every newsworthy activity Palmer did on every day of his life. It’s cool. Check out the timeline at www.arnoldpalmer.com.

And it is a momentous life of rarely equaled exuberance. Set aside the 93 professional golfing victories, the legions of adoring fans and all the indelible and enduring charity work, and it’s one of the most amazing lives in American history.

An expert pilot, he’s set around-the-world aviation records, is best buddies with several presidents and golfed with all but two of them since Ike. Bill Clinton says one of the great perks of the office is getting to play golf with Arnold Palmer. Kirk Douglas said in 1970 that no one -- not Sinatra, John Wayne or Ronald Reagan -- has more charisma than Palmer.

Even though I began interviewing him on a regular basis, I was still convinced the first time he was ever going to utter my name was when he’d say, “We have to fire this Chris Rodell!”

Now here I was holding a letter from the man himself. I opened it and read it aloud to my friends at the bar:

Many thanks for the new 2009 calendar. You do know how much I enjoy reading the amazing golf facts each day. Even when the day is done, I tear off the page and keep it for future reference. My very best holiday wishes to you and your family for a Happy Holiday.

I’m starting to think one of the most famous men in the world considers me a friend. And now I have evidence that I’m not a Hooterville kind of crazy.

Sometimes some of the best things in life are hiding just out of reach behind life’s proverbial pickle barrel.

I hope there’s some good news out there that you don’t know about that one day, maybe months from now, will make your day the way that letter made mine.

And best wishes to you and your family for a very Merry Christmas.
Posted by Chris Rodell at 1:26 PM

So how cool is that?! I loved Green Acres! Wish we had those shows for the kids today!