My tribute to the great (& gorgeous) Robert Redford 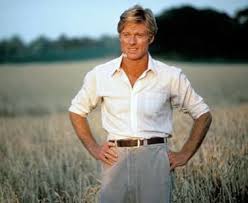 One of the most glaring contradictions of my life is how in no way do I consider myself a homophobe, but would watch every single one of my male friends die before I’d resort to mouth-to-mouth resuscitation.

It would just be so everlastingly awkward and I would much rather do nothing and end their lives than do something and end our friendship.

I was thinking of this yesterday as Val and I were enjoying Robert Redford in “An Old Man With a Gun,” which we both recommend, as do a consensus 92 percent of Rotten Tomato movie critics.

Redford is on screen for almost the entire film and the whole time he is I’m thinking of how if I’m ever in a room with Redford and he fell over clutching his heart I’m thinking I actually might demand, “Quick! Someone bring me some Binaca!”

The movie starts with a mirrored close-up of the 82-year-old Redford looking about 182. The weathered face has deep crevasses, age spots and all the ravages of grim longevity. It ain’t pretty. I suspect the director did this to startle us into forgetting just how handsome the star is so we can accept him as an everyday bank robber.

As a filmmaking technique, it’s an utter failure because when the camera pulls back we see it’s that familiar gorgeous face and think, ahhh, it’s Robert Redford. We can if we choose watch the rest of the movie with the sound down so it won’t distract us from the visual splendor.

If I’m in a bank and that old man with a gun walks in and says, “This is a robbery!” I don’t just give him my money.

I’d also give him my wife!

I know in these divisive times some of you despise Redford because of the liberal causes he promotes. I’d urge you to set aside the partisan pettiness. You shouldn’t let opposing politics interfere with your critical enjoyment of anyone’s art.

I’d never let Scott Baio’s MAGA ardor prevent me from watching old “Joanie Loves Chachi!” reruns, which I intend to do the instant every single other form of visual, aural or tactile entertainment simultaneously disappears from the planet.

Redford was great in “The Way We Were,” “The Natural,” “All The President’s Men,” and “The Great Waldo Pepper.”

And we love the rather obscure “Sneakers,” the 1992 caper about national security computer hackers.

One of his best is the one where it’s just him and he says just one word and — hallelujah — that word is the f-bomb. It’s the Oscar-nominated “All Is Lost,” from 2013.

Redford isn’t even my favorite actor. That would be Paul Newman, peerless if for no other reason than he starred in “Cool Hand Luke,” my very favorite movie of all-time.

Of course, Newman and Redford were best friends and together starred in two of my other top favorites “The Sting,” and “Butch Cassidy and The Sundance Kid,” the latter being the namesake inspiration for the Sundance Film Festival, an event that’s led some to declare Redford the “Godfather of the Indie film.”

Redford and Newman shared a love for practical jokes, the most elaborate involving a junked Porsche sports car that Redford had delivered to race fan Newman’s driveway . It was wrapped in a frilly blue ribbon. Without ever acknowledging the joke, Newman had the car crushed and returned to Redford but cunningly had it placed — frilly blue ribbon and all — in the pristine center of Redford’s living room.

He’s announced that “An Old Man With A Gun” is his last acting role, news that disappoints me on many levels, not the least being my bucket-list ambition to direct him to in one scene take the wheel of a  sporty crimson Mustang just so I could say I was the guy who finally filmed a scene of a man named Redford driving a red Ford.

So, yes, I love Redford and I’ll one day shed a tear at his passing and our collective loss of so much grace, charm and pure human beauty.

And if that passing were to happen as a result of my refusing to bestow the kiss of life?

I’m suffering from a persistent sore throat and I wouldn’t want to risk spreading my germs to a man I so admire.