Mom's fallen & may not get back up 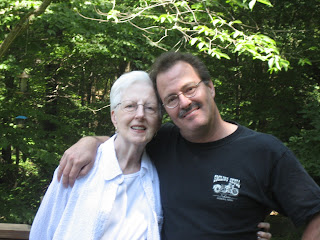 I’ve been the primary care giver for my darling 84-year-old mother since 2010 when she first began exhibiting signs of mild dementia. In the last two weeks under my primary care, the old gal’s been diagnosed with lung cancer, pneumonia, severe dementia and osteoporosis after falling in her kitchen and shattering her left wrist.

Primary care giver? Murder Inc. has nothing on me.

She’s since Sunday evening been in the ICU at Latrobe hospital. She’d spent the day on our porch sipping wine and complaining about needing a nap. I took her to her apartment, settled her into her chair and told her I’d see her Monday.

Unlike many dementia patients, she was still capable of living alone, albeit with our daily visits. She can make coffee, work the microwave and — hallelujah — take care of her intimate personal needs.

It was about 7 p.m. when the neighbor from the floor below heard her fall and called 911 and me.

From my understanding, her dementia is rare in that she’s become even more cheerful than she’s ever been — and she used to make Fred Rogers seem like a sourpuss.

On what was to become her worst night since, I guess, a 1982 double mastectomy, she was joking about needing wine and telling the paramedics the pain was a 7 on a scale of 1 to 10. If there was pain, it was not at all evident. No moaning. No grimace.

When they wheeled her stretcher past the ladies gathered on the porch outside, she responded to their questioned concerns with, “They’re taking me to the hospital. I’m having a baby!”

I wish I could say with certainty she was joking.

The pain didn’t ding an obvious 10 until two hours later when they gruesomely reset the bones. One doctor gently held her wrist, another her fingers, and together they began gingerly tugging in opposite directions.

I remain surprised she muffled her screams. Had she not, I wonder if I’d have run like a coward out of the room. Instead, I stood at the end of the bed messaging her feet and feeling sure I’d failed her.

We spent the next seven hours in that room with me trying to patiently respond to her deliriums about the location of her purse, her need for Kleenex, why her arm was in an annoying sling and what all these friendly strangers were doing in her bedroom. Every 10 minutes I’d literally have to wrestle this 104-pound grandmother back into the bed to prevent her from getting up to undertake various missions.

It was all so much pain and absurdity.

I’ve read how some children say they felt God’s divine presence in the death room when a loved one passes. After Sunday, I wonder if the presence I’m destined to most feel will be that of the late Moe Howard.

A chest X-ray revealed a lung cancer and pneumonia. She’s rallied from her Sunday evening lows when the doctor described her status as precarious, but an experienced nurse described her as feisty. She pegged her term at six months.

She has a living will and we’re today looking at hospice options. We have maybe three days to decide.

I told an oncologist about how the sudden onslaught of deadly diagnosis made me feel like I’ve failed my mother. He said: “Did you think under your watch she was somehow going to become younger and healthier?”

I guess in these situations we’re all hardwired to feel like failures.

I remember after a round of petty gripes involving having to devote so much free time to her care telling my daughter that if after Mom dies and she sees me crying she’ll know the only reason I’m doing so is because I think someone judgmental might be watching.

Right now, my fear is if I start crying I may never stop.