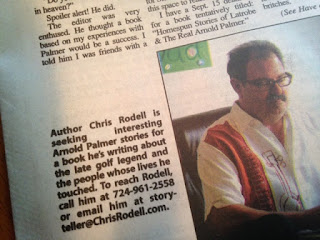 A big thank you to Steve Kittey and The Latrobe Bulletin for allowing me to use their front page to announce my new book and to solicit their readers for the best local stories about Arnold Palmer. I encourage you to purchase copies at your local Latrobe newsstand. For out-of-towners, here’s what I wrote …

For professional reasons, I was pleased when an editor for Triumph Books called to ask if I had any good Arnold Palmer stories.

I told him I did. I was privileged to interview him nearly 100 times since 1998, the bulk of them being hour-long, in-depth Q&As done as a correspondent for Palmer’s posh Kingdom Magazine. We were chummy enough that in 2013 he graciously agreed to provide the foreword to my book, “Use All The Crayons! The Colorful Guide to Simple Human Happiness.”

Our last interview was five weeks before his Sept. 25 passing. My last question?

“Do you believe there’s golf in heaven?”

Spoiler alert! He did.

The editor was very enthused. He thought a book based on my experiences with Palmer would be a success. I told him I was friends with a few locals who knew one or two Palmer stories that might be worth sharing.

“How many friends?” he asked.

That’s where you, my friends, come in.

I want to hear your best hometown Arnold Palmer stories. You can call me at 724 961-2558 or email at storyteller@ChrisRodell.com. I’m grateful to Steve Kittey and The Bulletin for offering me this space to reach out.

I have a Sept. 15 deadline for a book tentatively titled: “Homespun Stories of Latrobe & The Real Arnold Palmer.” I’m interested in hearing your stories because I’m convinced Palmer fans around the world want to know our secret.

They want to know why a legendary man who could reside in palaces around the planet chose to live and die in the same small western Pennsylvania town where he was born.

It’s a story of how one small town and a big time celebrity forever bonded to forge a mutually beneficial relationship admired around the world. Palmer gushed about Latrobe, it seems, specifically because the folks here never really gushed about him. Neither Latrobe nor Palmer took the other for granted, but neither took one another too seriously, either. The mutual love was engrained, but never enforced. A man known for hitching his pants never, in the watchful eyes of observant locals, ever got too big for his britches.

I’ll try and include as many stories from as many people as I can, but spacial constraints mean I can only include the very best, which will be determined by me and my editors.

So did Arnold Palmer ever see you hit a great shot? Give you a golf tip? Did he dine in your restaurant? Did he send your daughter a thoughtful get-well card when he heard she was ill? Did anyone ever roll out the red carpet for you on vacation when you casually mentioned you were from Latrobe?

I want to hear it.

“Homespun Stories of Latrobe & The Real Arnold Palmer,” is scheduled for a spring ’18 release.