Yukkin' it up over laugh track history (from '15) 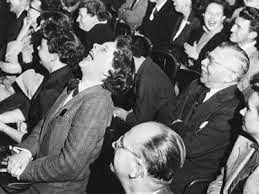 I plan to spend tomorrow commemorating the 2003 death of Charles Douglass by laughing my merry ass off.

Douglass died 12 years ago tomorrow at the age of 93. If his funeral was a sad one, I think Douglass would have disapproved. His funeral above all others should have been a laugh riot.

Douglass was the father of the modern laugh track.

From the late 1950s through well into the ‘80s, Douglass was responsible for  mechanically producing nearly all the laughter for America’s golden age sitcoms. TV Guide profiled him and said in 1966 he’d built a monopolistic empire on canned laughs.

Douglass’s recorded laughs are the uncredited co-stars of “Bewitched,” “The Munsters,” “I Dream of Jeannie,” “The Beverly Hillbillies,” “Lucy,” and “The Dick Van Dyke Show.”

It was very expensive, but apparently less costly than producing anything that was genuinely funny on its own.

“Cheers was filmed before a live studio audience.”

Except when it wasn’t.

Every episode of  “Cheers,” one of my all-time favorites, kicked off with those words, a Good Housekeeping Seal of Approval that verified the laughs you were about to hear were authentic.

The problem is Douglass’s tickling fingerprints are all over “Cheers,” too. Same goes for “Frazier,” “Barney Miller,” “The Bob Newhart Show,” “Taxi,” and a host of others.

Many of the supposedly “taped live” shows were artificially sweetened by what was known in Hollywood as Douglass’s “mysterious laff box.”

Want to hear something funny?

The laughs over the years are all the same. Many of the laughs you still hear on today’s shows were harvested from shows from decades ago and simply replayed.

So a truly discerning listener could conceivably go back and detect the same precise laugh from the same man or woman who laughed one time at a show that today is 40-years old.

The humor changes. The laughs do not.

I became hyper-sensitive to laugh tracks, I guess, when I started being bludgeoned by the ones Disney Channel uses on shows designed to appeal to girls like our young daughters.

Each punchline produced the uproarious kind of laughter you’d hear down at the old Bada Bing after Tony Soprano told a knock-knock joke.

The only ones not laughing were the intended target audience right there in the room.

As a father, it was upsetting. It was upsetting, too, as a hockey fan because I wanted to throw their asses the hell out of the room so I could watch the Penguin game.

But, no, they kept staring at the mysterious laff box like it was bestowing the gift of spontaneous hilarity.

Does the laugh track make something funny even when it is not?

“Seinfeld,” maybe the funniest show ever, uses a heavy, but deft laugh track.

Would it be as funny without? I think so.

“Curb Your Enthusiasm,” its sort of alter-ego uses none and it’s every bit as funny.

Would this blog be funnier if I had a chorus of gigglers to prompt you where you’re supposed to chuckle?

Maybe it’d be worth a try.

I guess I feel the same way about laugh tracks as Milton Berle did. He was at first reportedly miffed his humor needed any sweetening. He didn’t become a believer until one of his favorite jokes failed to click with the actual audience.

“Well, as long as we’re here doing this, that joke didn’t get the response we wanted,” Berle said, directing laughter be added. First some, then more and then until finally his ego was satisfied.

I speak; some laugh, some cry, some snooze