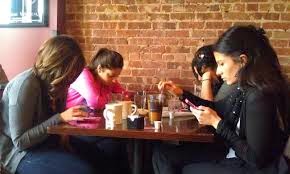 (663 words)
A growing number of restaurants are giving 5 percent discounts to families who agree to put the damn devices down and engage loved ones during vital meal time.

I think it’s a great idea. I read about on my phone last week while I was ignoring my family at a local restaurant.

I think it would be fun to exasperate a waiter or waitress by insisting I was entitled to the discount anyway because, indeed, even though I’d been on my phone my calls dealt with uniformly grave matters.

Then I’d let the server overhear me talking about my blog.

Of course the best thing to do would be to as your order was being taken would be to pretend to answer your phone and shout, “No! No! No! Make the incision behind the left ear! The left ear!”

Then set the phone down and say, “And I’ll have the lasagna.”

I’m always fascinated by the increasingly common site of the family unit sitting at the restaurant and appearing as socially distant from one another as the planets of the solar system.

When did it all go so wrong? What if you need the salt? Text the request?

What about if you need a genetic match for a new kidney? I guess you could try Craig’s List, but there are merits to asking a sibling.

And, most pressing, could that one day be me and mine?

See, I’ve been at that table as both son and father. I understand how family dynamics can pulverize efforts to even appear civil in public. We had a night out a couple of weeks ago that was brutal.

The sisters were warring. Val was angry. The tension was palpable.

It happens. I mean, we can’t all be as happy as Jon & Kate Gosselin.

The difference these days is disgruntled family members can e-scape to places that make them feel loved and important.

But she and I would never dream of using our phones in any dining situation. Like so many parents, we’re trying to set a good example. It seems to be understood by the 14 year old. She’s yet to push back on the policy.

How that’ll work with Lucy, 8, remains to be seen. After all, she’s the one who when we tell her she can’t have dessert reacts like young Damien Thorn does in “The Omen” when his parents try to take him to church.

What do these people — children and parents — have in common?

The only thing I can figure is a desire to feel important, to feel needed.

Our lives become appreciably more balanced and sane the instant we realize our jobs aren’t nearly as important as we think they are.

Of course, that’s easy for me to say.

I haven’t taken what I consider a really important phone call since the mechanic called and said, sorry, my car wouldn’t be ready ’til 2 p.m. and I had a 1 p.m. tee time and my clubs were in the trunk.

So I can’t pretend to know what it’s like to be truly important.

Still, I’ll never understand how so many people allow the need to appear important usurp the need to be loved.

Because each and every one of us has the opportunity to be truly important in ways that matter most.

Just don’t be disappointed if it’s only to the person you’re asking to pass you the salt.

Text messaging menace under my roof