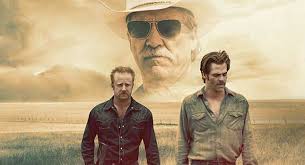 And take me with you!

It’s that good. Val and I saw it Wednesday and thoroughly enjoyed it.

It had 98 percent Rotten Tomato rating and we love the actors so I thought it would be a satisfying shoot’em up.

It is that, but it’s so much more. Even minor characters are bestowed with crackling dialogue that sounds like Shakespeare if Shakespeare were a west Texas redneck.

Seeing a great heist movie like “Hell or High Water” had me thinking of some of the bank robber stories I’ve done and there’ve been a bunch.

Let me tell you about two of them. One involves a man, the other a man and a woman.

The first was Carl Gugasian. I wrote about him in ’05. I urge you to read the story. It is very compelling.

And — and this is just a wild guess — is tax-free dough.

He viewed robbing banks as a job. He’d spend his every waking hour either planning to rob a bank or being actively involved in robbing a bank. His stake-outs to discern patterns lasted days.

Retired FBI agent Bill Rehder told me: "To me the most remarkable thing about Carl Gugasian he was able to fend off every instinct of human nature and not tell a single soul that his life’s work was robbing banks. He is the King of Bank Robbers."

The zipper-lipped achievement is rendered less remarkable when it is revealed that Gugasian was a king without a kingdom. Confiding friendships and intimate lovers were occupational hazards an over-achiever wouldn’t dare risk.

No friends. No fun. Only the endless gnawing fear that one day he’d get caught.

Wouldn’t that make a great movie?

I’ve lost track of the other robber. I don’t remember his or her name. Heck, I can’t even find the story I wrote.

But the facts are seared into my brain.

There were a rash of Philadelphia-area bank robberies committed by a slightly built middle-aged male driving an ’79 Eldorado Cadillac. At several investigations the getaway car was actually stopped by police.

But each time the driver was permitted to go free. Why?

Because police were looking for a man, and this driver was a woman.

And what a woman. Flaming red hair, long legs and voluptuous 44D breasts.

The situation led to one of the best true crime quotes I’d ever heard. Because one police officer happened to pull the Caddy over just minutes after the robbery. The driver in no way matched the description of the suspect. But there was bag full of money on the seat right beside a smoking gun.

“When we took her in and did a routine strip search for contraband, we found something in her underwear that should not have been there. It was a penis.”

Now, how did that get there?

The perp was a true hermaphrodite. She’d rob banks as a man and during the getaway would don a wig and remove an Ace bandage that had confined her ample bosom.

It’s a pity I can’t find the story. I recall it being an entertaining read full of salacious word play

I do remember the story’s untidy conclusion. The courts were furiously debating whether the culprit should serve time in a prison for men or one for women.

Defense attorneys said she was afraid of being victimized in a prison full of men. Can you imagine?

But prosecutors said the physical evidence outweighed their arguments, that a significant lurch occurs whenever you drop a fully functional penis on the scales of justice.

And why isn’t that a heist movie?

The only thing I can figure is it’s just too titillating for all those boobs in Hollywood.