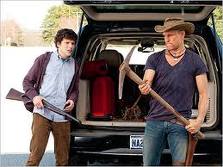 People lean in confidentially when they ask my opinion of the bloodthirsty monster dividing the public and causing millions of Americans to lose sleep at night.
And I’m not talking about Sarah Palin.
Yet.
Oh, I’ll get to her.
I’m talking about zombies. They are everywhere.
They are to this holiday season what Beanie Babies and Tickle Me Elmos were to gentler days gone by. They are red hot.
What do I think of them? I adore them. Can’t get enough of them.
It surprises even me.
One of my favorite comedies of the past five years is the uproarious “Zombieland.” The Woody Harrelson/Jesse Eisenberg movie is a bloody riot, and I mean that in both the literal and the British sense.
My wife and I have already watched it three times. It has cartoon violence, over-the-top giggles and the best Bill Murray cameo ever.
Then there is the exact reverse of that jolly satire. It’s AMC’s “The Walking Dead.”
The story is one of utter dread. There are no laughs, no sly lines. Just a horrific tale of urban survival and gore galore. Its slim six-episode run just concluded last Sunday. The skimpiness of its first run meant AMC had little faith in its potential.
Guaranteed producers have in their rush to capitalize on the sensation become like zombies themselves, albeit ones who feast on sushi and not careless humans.
So, yes, I’m currently infatuated with zombies. I find myself wondering about them and how I can differentiate one from, say, my friends at the bar.
Zombies have blank expressions. Check.
They aren’t picky about their looks. Check.
They have nothing to do all day. Check.
They eat with their fingers and are confused by things like silverware. Check.
If you think I’m being unduly judgmental about the boys in the bar, you are mistaken.
I was checking on myself.
I don’t think I’m a zombie, but apparently that’ll be an option if the kitchen ever runs low on chicken wings.
So with “The Walking Dead” in production, our TV is event free on Sunday evenings.
God help me, I decided to fill an hour of programming about the walking dead with an hour of TV featuring a woman who is just so, golly gee, full of life it’s surprising someone hasn’t jammed moose entrails down her throat to get her to shut the hell up.
Honest, I was just about to write a post congratulating myself for not having mentioned Sarah Palin all year.
The stinging Aaron Sorkin blast about her killing a caribou to show her bona fides to voters who think Ted Nugent an agile-minded man of reason was, I guess, what got to me.
But the real reason I had to watch was the same reason I used to watch a professional wrestling match when two titanic villains were set to grapple.
Yes, last night it was Sarah Palin vs. Kate Gosselin.
And, let me tell you, it was better than a cage match between George “The Animal” Steel and Rowdy Roddy Piper.
The show started with Sarah shopping for guns, talking about how much she loves guns, about the many problems guns can solve and why guns give her the kind of feelings the rest of us get from watching things like E.T.
I’ve never heard her in any interview gush as much about husband Todd, although guns, even unloaded ones, certainly have more to say than he does.
The show wound up with the Palins camping with the Gosselins. It couldn’t have been more awkward. Sarah spent the entire time rhapsodizing about the joys of Alaska and Kate kept saying, in essence, gee, I hate Alaska.
Kate looked like I must look when a Jehovah’s Witness is eager to proselytize to me during a Steeler game, only with a snazzier haircut.
Sarah’s father rudely said of mega-mom, “She did nothing but bitch as soon as she got off the plane.”
It was fascinating. Here were the two stars of second tier network doing their best to sabotage each other.
News today is that Sarah is in Haiti on what’s being called a humanitarian mission. I heard some rah-rah sound bites and can only imagine they’d edited out the part where she says the solution to all Haiti’s godforsaken problems is to relocate the entire island to suburban Wasilla.
Coincidentally, Haiti is where zombie folklore originated in 1937. You can look it up.
So it makes perfect sense to cynics like me.
She wasn’t on a mercy mission. She was campaigning.
The only people who can see her in a position of leadership any more are truly brain dead.
Posted by Chris Rodell at 11:36 AM

Any man who mentions The Animal in any way, shape, or form, is my buddy. George was the absolute best, more so when he was an out-and-out villain.

Back in the earlier days of my watching wrestling, which would be the 1960's, I would enjoy the matches on TV with My Dad. Now, we were both hip to action. We knew it was as unrehearsed as a Balanchine ballet. Still, My Dad, an ex-professional boxer, said that the one guy with whom he would not, under any circumstances, get into the ring, was George Steele. He was that menacing before everything became over-the-top and cartoonish during the 70's and 80's.

Well, that's sure cool, Suldog. Both the fact that you remember The Animal and that your father was a professional boxer.

Here in Pittsburgh we all still revere Bruno Samartino. There were some real entertainment gems in the old heyday of the sport. I haven't watched it since Gordon Solie and Piper hosted a great show on TBS back in the early 1980s.

Thanks for the note, my man.

Gotta love a post and comments that include of all elements, Classless Kate (Gosslin), George the Animal Steele and Bruno Samartino. I think a cage match comes to mind.

We'll just have to agree to dis-agree about Sara Palin. While she'll likely not end up in office anywhere, anytime soon, she is doing a good job of laying the ground work to ensure the nightmare of 2008 is not repeated again in 2012. Ha-rumph.

Hey, I didn't get a Harupmh from that guy!

I'll see your Ha-rumph and raise you a Huzzah, Max. And I'm glad you're in no mood to bicker. I was reluctant to even mention her, but she's clamoring about for so much attention it was unavoidable.

The next to years ought to be interesting to those of us who enjoy politics as sport. I think the Republican establishment are still afraid of her, but that'll change. Someone's got to take her on.

If she's the leader of the party, and right now she is, she will marginalize the GOP.

Merry Christmas -- and keep on shoveling, and I mean the Minnesota snow!