Merry JesusChristmas to all! (even you sinners) 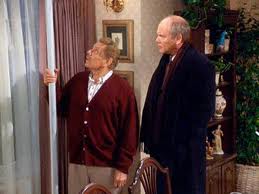 I’m such a superior Christian I will no longer limit my holy culture warfare to just heathens who say “Happy Holidays!”
For me, even “Merry Christmas!” insults my savior.
So let me to be the first to wish you a most politically incorrect, “Merry JesusChristmas!”
Wishing someone a mere Merry Christmas and not including His first name is, to me, as insulting as calling the Messiah, “Dude.”
At one time I may have been like you. I said what I thought was an innocuous “Happy Holidays!” to everyone I met during the two-month-long mirth march that is the sprawl-i-days. I did this because people got bored and walked away as I stood there and gushed about just how much happiness I wished to bestow.
I wanted them to have a Happy Halloween, a Happy Thanksgiving, a Merry Christmas and a Happy New Year. B-list holidays like Groundhog Day were merely implied.
But I have Jewish friends, too. I want them to have a Happy Hanukah and all the other days, too.
In my travels I meet blacks who celebrate Kwanza, agnostics who are devout in celebrating nothing and people of every religious stripe. It’s a big ol’ world out there, full of Buddhists, Hindus and celebrity Scientologists who swear their sacred beliefs are key to looking fabulous and getting invited to star in movies made by successful Jews like Stephen Spielberg.
I recently read of a California inmate who persuaded the court to let him celebrate Festivus, the Frank Costanza-orchestrated anti-Christmas.
Now, I may have disagreed with the beliefs of many of these individuals, but I didn’t want to crusade against them, especially during the holidays.
That would be rude.
Really, I just want everyone to have one hell of a good time. Life’s short and full of pain. Dance whenever you hear the music.
I wish everyone had the time to hear my most heartfelt and colorful wishes.
I hope you’re sitting down for this. It’s a mouthful. Here goes:
“May tonight you sleep soundly and enjoy the world’s greatest dreams and may tomorrow you awaken to a golden sunshiny day when all those dreams begin to magically come true. May it be the best day of your life and may every day after that only get better and better and better until your whole happy existence is complicated by a fantastic Powerball jackpot victory.”
Despite is earnest intentions, that one cost me friends who were either too busy to stick around for the full incantation or thought having things like man caves full of worshipful harems would distract from watching the football games.
Everyone -- Jews, African-Americans, Celtic Druids and imprisoned Festivusians -- seemed to prefer the snappy omnibus “Happy Holidays!”
All but the Christians.
If you didn’t say “Merry Christmas!” you were in league with Satan -- and I wonder is there is a Satanic equivalent to Christmas? Do they exchange gifts?
If it involves orgies, and I suspect it must, they aren’t publicizing it enough during membership drives.
In a season when many of us somehow manage to squeeze in a little worship, I want to reference The King who wore around his neck a cross, the Hebrew letter chai, and a star of David because he said didn’t want to be excluded from heaven on a technicality.
That’s The King all right. The gospel according to Elvis.
It’s my second favorite Elvis quote right behind, “Milk makes ya sexy!”
Like Elvis, I wouldn’t want to be excluded from a posh afterlife for not being Christmasy Christian enough. That’s why I’m one-upping even holiday busybodies like the American Family Association.
Again this year, the  organization issued a McCarthy-like list of companies that insist their employees greet customers with a cheerful, yet secular, “Happy Holidays!”
Well, they’re now subversive in my eyes for abbreviating “Merry Christmas” at the expense of the birthday boy.
That’s all for now. I’m off to find more ways to save Christmas for us poor beleaguered Christians and warn everyone that Santa is just Satan to a careless typist.
So, to all my devout Christian friends, Merry JesusChristmas!
And to those insufficiently sacred and, in the spirit of the season, I wish for you the previously referenced bit that starts with a good night’s sleep and ends with the Powerball winner.
Either way, may you all hit jackpots, spiritual and otherwise, on this holy, happy day.
Posted by Chris Rodell at 3:52 PM

I'm as heathen as can be, and I still say Merry Christmas. I now see the error of my ways....

Happy Days, Chris. And Happy Baby New Year. Look forward to keeping up with your blog, for enlightenment and fun, in two oh one one.

Thanks, you guys. I hope you had great Christmases.