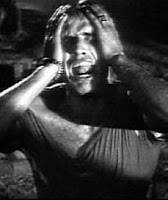 This weekend we’ll be shooting off fireworks, waving sparklers and saying solemn prayers of thanks that we’ve survived so much deadly tumult.

Coincidentally, it is the Fourth of July.

The 234th birthday of the greatest nation in history is secondary to the reason we’re celebrating. This is bigger than that.

Ken Burns ought to do a documentary.

America’s survived presidential assassinations, Vietnam, Watergate, Kate Gosselin and the multitudes who get their hair cut to look like her.

Precocious is a word a lot of people use to describe a puppy like this.

I use crime spree.

The keystones of character I treasure in all canine companions are sweetness and stupidity.

Stella is wild and disobedient. And she’s cunning. If dogs like Stella ever develop opposable thumbs and figure out how to open refrigerator doors, the human race is finished.

No, I say, she’s incorrigible and needs tased.

I think I could break her, but my daughters restrain me from dispensing the profane discipline I’d so like to deliver.

I try and carry a dish of spaghetti to the dinner table and she jumps on me. I hiss a string of barely printable invective at the dog. The 9 year old bursts into tears.

“Daddy! Stop being mean to Stella!” she cries.

I told her she deserves meanness.

“But it makes me worry you’re going to be mean to me if I’m ever bad.”

Of course, that’s exactly what I’m going to do. When our youngest gets too big to cuddle, I’m going to inform the girls I’m pioneering an innovative parenting technique I’m calling “Conditional Love.” I’m only going to love the daughter that’s nicest to me.

But for now I’m saddled by parenting convention so I can’t be as mean to the dog as I’d like to be. Thus hamstrung, she’s turned me into a BP executive in the face of a natural disaster I’m impotent to contain.

This is never more evident than when she eludes our incarcerations and breaks out into the wild.

Really, any grown man chasing a disobedient dog must feel like Tony Hayward did in the early days of the endless gulf spill

There’s nothing you can really do. You look feckless even trying and your biggest concern is trying to appear like you care when all you’d really like to do is go back inside and let someone else deal with all the messy chaos.

But Stella broke loose yesterday on my watch. I had to fetch her.

I was in the neighbor’s spacious yard for 15 minutes running in circles after her -- “Stella! Stella!” -- and shouting threats even a dog understands are empty.

I began to realize just how stupid I looked when I saw the neighbors bring out lawn chairs and a cooler full of beer.

They know, too, this show is far from over.

See the girls want a dog. So does my wife (sort of). But we want them to understand just how difficult it is to be responsible for an animal that’s really as big a burden as a new baby.

I don’t want another dog.

So in order to inoculate ourselves against that eventuality, the only solution is to expose the girls to a dog so bad that they’re bound to have second thoughts.

And more me chasing after the dog named after the girl that drove Marlon Brando’s character insane in “Streetcar Named Desire.”

After having had three labs (not all at the same time) we have now accepted our inability to properly tame, I mean train, these ADD dogs. They're sweet, they're happy to play all day long, they have oodles of energy - it's just the little problem of their refusing to relax and chill, that is, until they're too old to do anything else.

I don't know if I'd rule out getting a dog if I were you, maybe you just need to consider another breed. We finally got a papillon (yes, I know, the husband initially refused to be seen walking her), and life is good. So good that we'll get another one day.....

Thanks, Emma. Yeah, I'm sure I'm not the greatest dog trainer either. Our golden was pretty "precocious," too. I'd like another dog, too, but I enjoy the freedom of being able to go away without having to race back to let the dog out.

And I know the dog won't be the girls'. It'll be mine.

Maybe a papillon is the way to go!