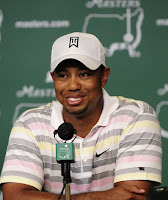 There is much criticism today over how the herd golf media was cowed by Tiger Woods.

Me, I’m just happy for the opportunity to describe paunchy writers who cover a pastoral game as being a cowed herd.

Of course, no one should have expected any revealing news to emerge from Tiger’s press conference.

Golf media are so timorous their idea of a tough question is asking an arthritic old caddie if the lordly Davis Love III used a 5 or a 6 iron when he dunked his approach into a pond.

And who can blame them? It’s a great gig. It’s free food and free golf at some of the most idyllic places on the planet. It’s a boat only a fool would want to rock.

Why do you think someone as lazy and unscrupulous as I engaged in golf writing from 2000-2007?

I had two questions and the topics were tips and teeth.

My first question: “Tiger, your former 1,000-watt smile’s now registering only about 920. Why is your left front tooth a shade darker than the rest?”

I think that would have been an artful way of shaking some truth from him. He’s said his only injuries from the November 26 accident were a sore neck and five stitches on his lip.

There are armored tanks in war zones less safe than the $50,000 Escalade he was driving that night. He grazed a curb, a fire hydrant and a tree and wasn’t going fast enough in any of the bumps to cause the airbags to deploy.

So how did he lose the tooth? It’s a simple question.

The second question is in-directly related to the first: “Will you, a man who as recently as last year was worth nearly $1 billion, strive to become a better tipper?”

But cheapness is an affront to all mankind. I despise it.

Stories of him stiffing waiters and waitresses are legion, and I’m not talking about the parking lot kind of stiffing he gave Mindy Lawton, who earned $8 an hour slinging pancakes in the cream and green uniforms issued by Perkins.

I’m talking about how he mistreated all the women who were either hookers or underwent extensive plastic surgery to ensure everyone would think they were hookers.

Even in those tawdry sorts of encounters, the parties are entering a social contract that is loosely defined but understood by all.

He gets lots of wild sex. They, in exchange, should expect some lavish perks that go with bedding a superstar athlete on the hush.

They should get cars, jewelry, luxury rendezvous apartments in fabulous places.

It’s just understood, sort of like Elin had a right to expect some old-fashioned fidelity from her husband.

But Jessica Junger ended her affair after Tiger refused to help when she was in danger of eviction.

Lawton, the Perkins waitress, said the only thing she ever got from Woods was a chicken sandwich wrap from Subway, which might be acceptable if she’d been screwing that Jared guy. But not Tiger.

If he really wants to turn his life around, he should become a one-man stimulus package.

Me, I’m an extravagant tipper and it feels great. I recently left $5 tip for two beers and a friendly smile. The bartender rang the bar bell and yelled, “Man, you’re awesome!”

And for that moment, I was. I know most people in the hospitality industry would rather be home with their kids than out pretending my jokes are funny.

It’s such a simple gesture and it won’t break anyone, but you’ll feel great doing it and when they’re home soaking their aching feet they’ll say prayers asking God to bless people like you.

So I’d advise Tiger to fix his marriage and stop screwing Perkins waitresses either in parking lots or with less than 20 percent gratuities. If I were him, I’d never leave less than a $100.

And, for heaven’s sake, don’t skimp when it comes to picking a dentist you rely on to get the shading of your replacement tooth just right.

Those are my tips to Tiger.

Damn, that felt good.
Posted by Chris Rodell at 2:27 PM

It's easy to root against a billionaire, but it's fun to root for a billionaire who enjoys the perks. I'd love to see him enjoying what should be a spectacular life.

If I can have fun earning next to nothing, he should be having a ball. I hope it all works for him. I like happy endings.

Have a great weekend, Char!