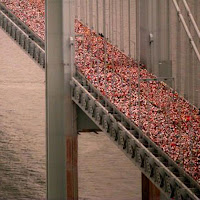 The three young men were dashing in every sense of the word. I was at a cross walk at the University of Pittsburgh when the shirtless trio came running past.

They were trim, fit and ran with a husky kind of ease you see in Olympic athletes.

Had they paused momentarily to take stock of me, a middle-aged man trending toward paunch, they may have felt pity at my physical decline. They may have thought my days of running were past.

That’s what I thought, too, and the idea pleased me. Running is a sweaty, arduous and unpleasant exercise. Plus, it’s one of the many ill-conceived tortures people resort to for health reasons that often end up having unhealthy consequences.

There are muscle pulls, aching joints and careless, iPhone-fiddling drivers who absentmindedly veer onto the shoulder where you were sure you’d be safe.

So running, I thought, was something I’d forever outgrown.

Of course, I was wrong, wrong, wrong. Not two hours later, I was on the run again. And I realized just how joyful a really good run can be.

Here’s the key: A good run should never exceed 40 feet.

I was ending the class I teach early that night to chaperone the students to a journalism function featuring author John Grisham. I hadn’t told them we’d be attending and had carried on routinely as if they’d be subjected to another grinding evening of me talking about how unfairly the world’s always treating me and how if they wanted to do well in class they’d all write lavish essays telling me I’m great.

So they were thrilled when I announced a deviation from all the preening.

I mentioned the assignments and began in slow measured tones: “So let’s all head across the street to the ballroom . . . First one to the elevators drinks free all night!”

And I was off. In my mind it was like one of those nature shows where the cheetah flies through the brush. I ran 15 feet through the classroom, 20 feet down the hall, and about two feet to the elevator.

The act was so exhilarating I just stood there jubilant as the students came filing up. I’d beaten the field by a good 12 seconds.

My euphoria was so overwhelming that I’d forgotten to summon the elevator and we all stood there like morons for about two minutes until one girl reached out and pushed the “Down” button.

This led to a dispute over who actually won. Hard feelings were averted when we got there and realized everyone could drink free, a situation which would have made it my best class ever even if John Grisham had never said a peep.

Really, it was the greatest run of my life.

Many years ago I had some memorable runs, but they were always away from things, not towards them. I’ve run from police, begrudged girlfriends and angry men who wanted to beat me up for reasons I can no longer recall.

Self-preservation is a terrible but wise motivator for speed.

Now fresh from my hallway victory, I’m aware to how much I’m running and I’m thoroughly enjoying the activity.

Just yesterday, our 9 year old, as she is wont to do, challenged me to what she calls a “Silly Race” while we were waiting for the school bus.

Her rules involved skipping down the driveway, touching our noses to the headlights of both cars, making a rooster sound, then repeating up the other way.

She knows instinctively that, as I did with my class, it’s easier to win when you set the rules and announce an advantageous starting time like while your opponent is reading the baseball box scores.

I was so hopelessly behind I knew I had to cheat to save face. With my recent victory fresh in my mind, I turned the burners on full.

She disputes the outcome, but I swear I won by a step. But this victory was not without a price.

In my euphoria, I’d foolishly exceeded 40 feet, a mistake I won’t make again.

To maintain my appreciation of the exertion, I’m sure the distance I run will continue to shorten.

If what I see from all the commercials aimed at men like me during the Masters golf tournament are any indication, in a few years my idea of a really good run will be making it 10 feet from the couch to the bathroom before I embarrass myself.

Whether I’ll win those distant races is a matter for another day.

Email ThisBlogThis!Share to TwitterShare to FacebookShare to Pinterest
Labels: running, the joys of running 40 feet