Take this jersey & shove it 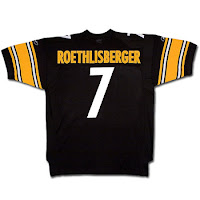 You’d think I’d have known better by now. It was just six years ago that I laid down the law about shelling out big bucks to wear the jersey of any professional athlete.

First of all, I didn’t want to wear a jersey of someone who would beat or kill his wife. You don’t see many tasteful folks wearing Buffalo Bills jerseys with no. 32 and “Simpson” on the back.

The player would have to be either a native Pittsburgher or enjoy a strong bond with his adopted city. He’d have to be visible in the community and do charity work. That’s important to me.

The guy would have to be a Hall of Fame shoo-in. The jersey needs an heirloom quality to it for it to be a smart purchase.

But for the past month now I’ve opened up my closet, saw the big black and gold jersey with the no. 7 and thought, “How could I be such an idiot?”

See, I didn’t consider a fourth essential rule: Wait until the player is dead or too old to disgrace himself, the team or me with shameful criminal activities.

But in a weak moment last year I broke all my rules and wound up with a Ben Roethlisberger jersey.

Blame the thrill of a bargain.

Every year a lively group of friends from New York City come to Pittsburgh and we all whoop it up for a weekend centered around a Steeler game.

One of the shiftier sorts brought a trunkful of pristine jerseys of questionable origin. They were dandies, too. Double stitched, hi-gloss numbers, NFL authentication, etc. The price tags for the Roethlisbergers said $125.

“Ha!” I said. “You must think I’m an idiot. Buying one of these, I’m sure, would make me an accessory to one of your criminal activities. And I have firm rules about whose jersey I’ll wear.”

“Look, the guy’s already got a rape charge against him in Reno and everyone in town’s heard stories about him being huge jerk.”

“I know, I know, he just led us to a glorious Super Bowl victory and he’ll likely retire a Steeler, but . . .”

I wore it twice and will never wear it again.

Ever since the damning press conference by Georgia District Attorney Fred Bright, I have been confounded by what to do with the damn thing. Didn’t want to burn it. Couldn’t give it to an impressionable.

So after much consideration, yesterday I got in my car and drove an hour to the Steeler’s headquarters on Pittsburgh’s South Side.

I handed the jersey and a letter to Steeler president Art Rooney II to the receptionist and asked her to give them to Mr. Rooney. She smiled and said, “I’ll be sure he gets them.”

Here’s what the letter says:

I don’t know what to do with this Ben Roethlisberger jersey. I can no longer wear it. I can’t give it to my nephews because I don’t want them thinking No. 7 is someone their uncle would want them to cheer on.

So I’m giving it to you. I’m a second generation Steeler season ticket holder. I travel a good bit and have friends all over the world. Like many avid Steeler fans, I consider myself an ambassador for the team and the city I love. I wouldn’t do anything to disgrace those proud affiliations.

Wearing this jersey in public would do that.

I trust you’ll know what to do with the jersey. I don’t want to ever see it again.

And the same goes for the son of bitch who’s worn it for the past six years at Heinz Field.”

I’ll pay big bucks for one.

Just as soon as I hear the man’s dead.
Posted by Chris Rodell at 7:49 AM

you must be one of the most interesting poeple i've ever encountered, and i love it. you're never afraid to speak your mind. i can only imagine the look on corporate's faces when they read your letter and the reasons why you returned the jersey. honestly, i'm not sure what i'd do in the situation. i always had the feeling roth was a slimeball, but never any confirmation until now.

i am the proud owner of a bob sanders jersey *huge colts fan* and since i got it, he's been consistently injured. because of that, i'd considered buying a tom brady & rothlisberger jersey to see if i'm really cursed.

i do have a question for you. since you're a native pittsburghian (?), how do you feel about santonio holmes being traded to the jets while ben's still sitting pretty with the steelers? double standard or no?

Well, what a flattering way to start the day. I guess I spend so much time inside my own head I'm not shy about expressing my opinions. Knowing that people like you actually care enough to read it, makes it all worthwhile.

I LOVE your idea of being so cursed you can doom enemy combatants. My instinct tells me you should start with a Brady jersey, but maybe I should have sent my Ben jersey to you. People here would be thrilled. I'm proud of the level of outrage at him.

I like to think the trading of Holmes was intended to prepare the team and the fans for harsh judgement against Ben. It was a shocking trade, but I approved.

There is a real groundswell here about dumping Ben. I don't know how anyone could cheer for him.

Thanks again, Lexcade, for your comment. I'm very flattered.