Our big bear is back 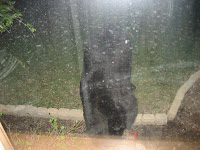 The bear is back and you all know what that means: can’t let the kids fill the pool with honey for any more midnight swims.

Your idea of secure parenting takes a significant shift when a 300-pound black bear turns up for snacks just outside your big living room window.

After a two-year absence, that’s what happened with us again early Sunday morning.

It was about 2:30 a.m. when I was awakened by a crashing sound. I did what I always do in these situations. I crept out of bed, pulled on my Star Wars Wookie pajamas and said a short, fast prayer that I wouldn’t have to do anything remotely heroic.

I like the idea of being a hero, but don’t like the odds of it happening in my home in the dead of night. Unless I can gulp a Bloody Mary or two, I’m just no good before “The Price is Right.”

Plus, if it was an in-home intruder, I’d be worried about subduing the crasher with sufficient force to ensure its docility, but not disabling it so much he or it couldn’t clean up the eventual mess while I went back to bed.

If I’m going to be a hero, I’d like it to happen in broad daylight in front of a TV station where I was returning from my barber and have the recipient of my heroics be a pretty single mother who wasn’t either Kate Gosselin or the Octomom.

So all this is on my mind as I stumble through the darkened house. The basement was clear. Maybe it was the front storm door which has a habit of banging around in the wind.

Yes, it was open. I pulled it shut, but not before considering doing something country boys perched on porches have been doing for years.

It was a brilliant moonlit night. I thought about taking a leak off the porch while staring up at the stars.

But it was a bit cold out. Had it been warmer, I might have died an embarrassing and bloody death.

Because for my final reconnoiter, I turned on the outside lights for one last looksee.

What I saw had me trying to rub the Twilight Zone out of my eyes. It looked like someone had parked a black Volkswagen right under the window.

The bear was back. It had pulled down a small bird feeder we’d suspended from the gutter to feast on sunflower seeds.

When we moved into the house up in the woods three years ago, it was an festival of bear sightings. We’ll never forget the night we saw a mama and three cubs in a tree behind the house.

We gloried at the thrill of rough nature right outside our walls. Then one day my daughter alarmed me by asking, “Daddy, do you think the bear would let me pet it if I gave it a marshmallow?”

Plus, as mentioned, on many nights I revel in taking a country boy leak. My fear was I’d one day be found dead, bear mauled, my pants down around my ankles.

Investigators would be stumped until a buddy would tell them with straight face: “What he was doing in the woods with his pants down, I cannot say. But this much I do know: He always talked about how much he loved animals.”

So now I’m more circumspect. I raced down the hall and woke Val with the news.

It’s difficult to convey just how unnerving it is to have a 300-pound animal with maneater potential just two feet from your couch.

It seemed unlikely that it would spring through the picture window and start chasing us around the kitchen, but the full effects of Global Warming are still being determined so it was an open question.

We took some Zapruder-quality pictures through the window. The flash eventually annoyed the big omnivore enough for it to wander away. But not before it stood up and gave us its full measure. It’s about 7 feet tall.

The next day Val and I argued about which of us was more afraid (trust me, it was her).

Now I have to reckon with what I’ll do next time the bear shows up near my porch to menace me and my family.

I suppose I could try and scare it off with an insulting splash from the only weapon a pacifist country boy conceals.

Or maybe it’d be better if I just answered nature’s call in a more refined way before my next investigation.

The big bear might surprise me first and I wouldn’t want to do anything that might risk ruining my Wookies.
Posted by Chris Rodell at 11:27 AM