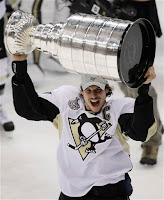 I was talking to a good friend of mine the other day when he asked an erudite question about this blog.

“Say, how come when the Pittsburgh Steelers were on their way to winning their sixth Super Bowl, you wrote six blog entries that either mentioned or celebrated the Steelers, but you’ve never once devoted a post to the Penguins,” he said. “It seems like an oversight on someone who usually has his finger so expertly on the public pulse.”

(Blog note: Anytime a truly feckless writer wants to sneak in a comment about something he or she wants to address without compelling reason, the writer invents a “friend” to simulate actual reader interest. In truth, the most erudite question any friend of mine’s ever asked has been, “Are you ever gonna pay me back that $20 bucks I loaned you?” So the entirety of the following conversation is made up.)

No sporting event focuses the nation or a city’s attention like a Super Bowl run. To become champions, you have to win four (or three with a wildcard bye) pivotal games culminating in the biggest event in professional sports. To win a hockey championship takes winning 16 games out of a possible 28. It’s a two-month grind. If I wrote about hockey as often as I’d thought about hockey, I’d alienate readers who stop by for other worldly insights.

“Excellent point. As a Pittsburger who’s experienced both championships now a combined nine times, are you saying you prefer the Super Bowl victory?”

Absolutely not. There’s nothing like winning a Stanley Cup. It’s exhausting. It’s every other night or so for two grueling months. The emotional investment of the hockey fan is enormous. There are times when you’re down 3-1 going into the final period of a do-or-die game. And there is an immense euphoria that comes with winning that game. But then two nights later you are back on the road facing another elimination game. To Penguins won two Game 7s on the road to win the cup. That might be unprecedented.

“Are you going to attend the champion’s parade on Monday?”

As a matter of fact, I will. I’m having the folks at Mac transfer info from my old to my new computer so I’ll use the downtime to revel in the city festivities.

“You’re a handsome gentleman, but you look a little tired these days. Feeling alright?”

It’s the hockey, my complimentary friend. I watch some games at home, but I enjoy being out among the people for the competition. For the past two months, I’ve been out at the bars or at parties with buddies to watch the games. It takes a toll even for those of us who aren't lacing up the skates.

“If you don’t mind me saying, you look like you certainly could play hockey. You’re very fit.”

How kind of you to say so. In fact, I grew up playing hockey. It was our sport. My brother and I were on the traveling teams from Pittsburgh. We played all over the northeast and into parts of Canada where we got beat by future professionals by scores of 33-1. But growing up playing hockey was one of the best things that’s ever happened to me. A boy on ice is never in hot water, or so they say.

“Ever play with anyone famous?”

I shared the ice with the sons of many famous Penguins like Vic Hatfield, Lowell McDonald and Duane Rupp. But I was tight with the great Ron Hextall who went on to become a famous professional goalie for the Philadelphia Flyers.

“My goodness, you certainly have enjoyed an amazing hockey history. I can’t thank you enough for all you’ve done to enlighten me about hockey, the Stanley Cup, and just how handsome, fit and fabulous you really are.”

Well, my friend, it’s been my pleasure. You’ve asked me some really great questions. Mind if I ask you one?

“Why, certainly, my wise and visually appealing friend.”