Cock-a-doodle-DON'T! The rooster crows . . . and crows 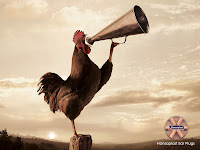 I haven’t enjoyed a really good night’s sleep since I first became ambitious about girls and having reckless fun far from the confines of the crib.

I don’t feel too bad about it. The woods, at least where I live, are full of those.
Posted by Chris Rodell at 1:18 PM

If you're not a farmer....its just not fun to put up with.

Wanna borrow my BB gun? If not...a noise machine might be the answer. Being a light sleeper is a curse with 3 teens in the house, but the sound of rain on a tin roof (even manufactured) is a blessing.

All in all it sounds like a beautiful and blessed setting you call home. I agree with Angie on the sleep machine, maybe it would help!

hugs and a lovely weekend to you, luv!