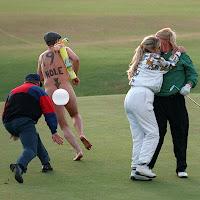 Something happened last week that caused me to do something I haven’t done in more than 20 years: I watched more than 30 seconds of tennis.

I can’t pinpoint when televised tennis became too boring for me to endure. I have great memories of being glued to the set watching Bjorn Borg and John McEnroe competing for Wimbledon titles. That was back when my TV broadcast about a dozen channels and seven of them contained some form of meaningful entertainment.

These days I have an array of about 800 channels with 775 stations that are utterly useless to me. Twenty-five out of 800 shows TV’s batting average is appalling, but the number of options for silly diversion has increased more than three fold as humanity marches on.

Of course, my interest in the French Open had nothing to do with actual tennis. By the happiest of coincidences I flipped on NBC just in time to see a man creep out of the stands and onto the court.

A spectator on the field of play is one of the most riveting moments in the wide world of sports. It enlivens every event and often it involves nudity.

I thrill to watch what happens when some of the most finely conditioned athletes on the planet go head-to-head with some of their most drunken and misguided fans.

I remember two years ago when James Harrison, the nasty linebacker for the Pittsburgh Steelers, splattered a drunken Cleveland Browns fan in a hit that for pure viciousness surpassed many of the ones he’s tattooed on opposing quarterbacks.

I’ve seen it happen on baseball diamonds, hockey rinks and will never forget the spectacle that resulted when, on a dare, an inebriated NASCAR fan leapt from the stands and, by God, stole the pace car for a joy ride around the banked oval. The guy made one full lap before foolishly stopping the car, climbing out and raising his hands in friendly surrender.

The ensuing beating he took convinced me that if I’m ever so foolhardy as to act on the same dare that it would be less painful to go straight into the wall at 180 mph rather than turn myself over to the mercy of NASCAR-loving rednecks.

That’s why I was so happy to have tuned in at just the moment the fan climbed onto the court.
It’s a good thing the culprit didn’t have any sinister intentions because neither Federer nor the lumpy security detachment reacted with any urgency.

It gave me a welcome jolt of reality TV while I’m waiting for “John & Kate plus 8” to show up again. But like much of tennis, it left me unfulfilled. There was no message. No humor. No creativity.

And no nudity. And that’s pivotal to making these sort of intrusions really interesting.

The merrymakers at the British Open understand this. That’s the fabled golf tournament where the winner is awarded the Claret Jug and fans are often treated to jugs of an all together different sort.

I was assigned to do a study of the history of streaking at the event back in 2001. The streakers generally fall into two categories: “Drunken Dare Takers” and “Creative Professional Streakers,” which is a category of one.

Typical of the first is Yvonne Robb, a self-proclaimed “professional lap dancer” who while giddy on alcohol doffed her duds and dashed onto the green to introduce herself to the then-single and eminently eligible Tiger Woods. Her attorney later told the court, “The drink getting the better she took the dare and was off,” (and so were her clothes, he forget to lawyerly add. “I understand the player smiled and said, ‘Thank you.’”

Put the great Mark Roberts under the professional category. A veteran of more than 250 high profile streaks (Olympics, World Cup), he maintains a professional standard: He refuses to let his fans down anytime his pants are.

At the 1995 British Open he made his run just as golfer John Daly was celebrating victory. Buck naked and barefoot, he carried a set of plastic toy clubs strapped over his shoulder.

On his back someone had written -- I’m assuming he had an accomplice -- “19th Hole” and an arrow that wasn’t pointing to a nearby pub. Someone photoshopped a dimpled golf ball over the only shot I was able to find, but it’s still worth a giggle.

I was thinking of all this today as -- here’s another coincidence -- I took our 8-year-old to her first tennis lesson.

It involved 60 minutes of that sweet tedium that happens whenever you watch about about two dozen 8 year olds trying to master something many 50 year olds never have.

I could see on the faces of the other parents that many were bored out of their minds. I wondered momentarily if it would give them a happy thrill if I took off my clothes and ran across the court.

But I wouldn’t dream of embarrassing my daughter like that.

Plus, I’m fairly certain the reaction of the waist high, racket-wielding children wouldn’t be nearly as passive as Federer’s was.

Justifiably, there would be no love for me -- and I mean that in both the on- and off-court scoring sense.
Posted by Chris Rodell at 12:30 PM

ACK! No streaking for you! LOL! BUt I do have to agree... tennis is super boring!!! Jenni