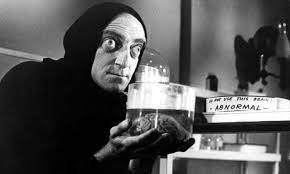 DBS is a groundbreaking Parkinson’s Disease treatment that involves implanting a thin electrode into the part of the brain that controls abnormal movements like, I guess, when guys like me try to dance to popular music.

That they drill straight into the head makes DBS one of those rare instances where a medical procedure breaks both ground and skull.

Maybe you’ve seen the ads. A Parkinson’s patient with wild shakes is shown being utterly incapable of buttoning his shirt. Then — voila! — literally at the press of a button he can play the guitar.

I don’t know if the gent had previous experience or not, but I’m hoping I become instantly expert at tootin’ the tuba!

The odds of anything like that happening today are very remote. Today is little more than a get acquainted meeting between me and the renown brain surgeon. He wants to determine if I’m a candidate for DBS down the road, maybe two, four — who knows? — 10 years from now.

So much can happen — good and bad — in those intervening years: they could find a cure for Parkinson’s; I could take a fatal tumble down the Tin Lizzy stairs — it’s a world of possibilities. Anything’s possible.

Well, anything ‘cept the Pirates being over .500 anytime after April 20.

My go-to Greensburg neurologist keeps telling me I’m “beating” Parkinson’s. She thinks I have an upbeat attitude that, three years into diagnosis, is keeping symptoms at bay.

I’m not nearly as confident. I’m staring into a future that may involve me incapable of either dressing or feeding myself. Some patients report an inability to swallow or blink.

Beating Parkinson’s? I feel blessed to be for now distracting it.

Maybe DBS will help with that tactic.

My goal all along has been to keep symptoms difficult to detect for so long that friends speculate I made the whole thing up just because I crave attention.

To me, it’s like living life on a trapdoor with a rusty hinge.

I’ve been looking forward to this day for the six months it’s been scheduled but then a widower friend sounded a discordant note. His wife died of Parkinson’s related infirmities despite being skillfully cared for by the same renown brain surgeon.

His warning: “He’s not the kind of guy with whom you’re going to want to sit and have a drink.”

No one’s ever classified another person to me like that.

And what does it say about me that caring friends don’t judge my brain surgeons on their results but on the the prospective likelihood we’ll wind up drinkin’ buddies?

“No, he’s just not a people person. Grumpy as hell.”

Why is a man who makes a comfortable living — certainly compared to me — unhappy when the I’m generally cheerful with Code Red flatliner income?

I wonder if he’s ever heard of Lake Titicaca.

Or maybe the problem goes deeper than that.

Some neurosurgery patients think we have supple minds, but really it’s all in our heads.

Tell your wife she has nothing to worry about, but am I sending hugs. The virtual bit makes them even more non-threatening. But the affection and concern are real, if remotely administered.

Positive attitude counts for a lot. And don’t you love it when someone has to urinate on your cornflakes by telling you a downer story about someone they know who died horribly from the same thing. Boo, hiss. The other thing is about the cranky doctor. They’ll tell you like it is or is not, but they’re fun to have on your side, and offer a good challenge to try to get them to laugh. Which I think you can.

Thank you, Barb! I agree with all you said and am grateful for the hugs. Hope YOU'RE doing great!