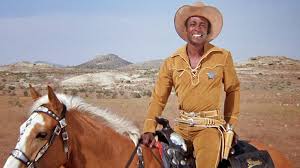 It’s only my third favorite Mel Brooks movie (behind “Young Frankenstein” and “Silent Movie”) and I find the ending too contrived to even watch. But “Blazing Saddles” has instructive elements for these fraught cancel-culture times.

A mush-mouthed prospector is dispatched to a nearby rooftop to alert people when he sees the new sheriff approaching. When he sees him and discovers his duskie complexion, he becomes agitated and yells, “The sheriff is a (n-word)!”

His exact wording is lost in the commotion below. The people seek clarity.

One interpreter says, “He says the sheriff is getting nearer!” Everyone roars their approval, which infuriates the lookout who repeats more emphatically, “No! I said the sheriff is a (n-word)!”

Eventually, everyone realizes ol’ Gabby wasn’t saying nearer. He was saying the sheriff is a word that sounds like “trigger.”

It still makes me laugh my white privileged ass off and takes me back to Ohio University. It wasn’t uncommon for me and my circle of friends to allude to it in shorthand when telling a story.

A buddy would mimic the prospector and say in garbled speech, “Ma E-con perfezzer  is a (unintelligible n-word).” And I’d translate, “He says his economics professor is getting nearer!”

And all the frat boys would roar with laughter.

Understand, this was 1985. None of us were “woke.” Hell, many of us were the exact opposite of woke. We couldn’t get out of bed all day, having blacked out the night before.

Can I still say “black” out?

Of course, I mention all this sudden sensitivity in reaction to the rampant insensitivity over the bogus fears of cancel culture.

Progressives say we should erase any distasteful recollections that might offend dainty sorts.

Our conservative friends — and that shows you just how liberal I am; I still consider many conservatives my friends — are apoplectic that things as innocuous as Dr. Seuss are canceled.

Where do I stand?

I stand quietly over in the corner with no shoes on.

I try hard not to offend anyone. I don’t like seeing anyone made fun of or be made to feel uncomfortable.

If there are racist images in some of the lesser known Seuss titles, they should go. It’s no big deal and if it reduces the chances any kid will be made to feel inferior then I’m all for it.

How does it hurt me?

Ideally, there’d be context. Read the script to “Blazing Saddles” and it’s shocking. But it’s pure satire and in that context it’s hilarious.

Mine’s a mindset duality that explains why I’m over there without my shoes on.

It doesn’t happen often, but on occasion we’re invited to homes where we’re asked to remove our shoes before entering.

Now, I like wearing shoes. I have some very stylish ones I dote on and enjoy showing off. And even the rattiest sneaker bestows the foot with functional practicality.

A sturdy shoe can protect the tootsies if you drop a knife or spill some hot tea. Plus in any fight or flight scenario, my go-to option is to run like a cheetah — a limping, paunchy, 58-year-old cheetah with Parkinson’s Disease. Shoes are a necessity in any get-the-hell-of-Dodge situation.

But if my host kindly requests I remove my shoes before entering, I mention none of this. I just take my shoes off and say a quick silent prayer the house doesn’t catch fire.

It’s the same when some business owner requests I wear a mask before entering.

Why is everything such a big deal?

We live in a time when many people are easily offended.

This is unfortunate because it coincides with a time when we’re absolutely inundated with people who are so enthusiastically offensive.

I wish I could persuade everyone to moderate their behavior, to be more understanding, to seek compromise over these issues that have nothing to do with how we live our lives.

All our culture warriors needs to appreciate the difference between victories and solutions. I fear if common sense solutions don’t prevail we’re all doomed.

You could say I fear the end is nearer.

So often you address sensitive topics with your special brand of humor and satire, often self-deprecating.
This time it is also very heart-felt, sensible, and touching. Much appreciated.

If even one person appreciates the thought I put into these blogs then it's worth it. And you're that person. Thank you, Melissa!

Fake outrage if you pretend the word is offensive that some are "allowed" to use and others aren't. Bad is bad - you can't have it both ways.