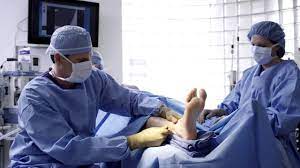 I was intrigued when an hour prior to surgery my foot doctor said my toe fusion procedure is one of his favorite operations. He has favorites?

“Oh,” he said, “It’s just fun. You hammer in these little brackets and you put the little pins in. You saw some little bones.”

I didn’t realize some operations were more fun than others. Fix this. Remove that. Sure, there’s that part of every procedure when the anesthesiologist signals light’s out and it’s safe for everyone to begin taking turns evaluating the patient’s genitalia, but favorites?

I felt reassured he was looking forward to performing my surgery and felt comfortable saying so. I wondered how I’d have felt had he expressed the inverse.

“Man, I gotta tell you, I don’t have a good feeling about this. The last one was a nightmare, blood and toenail flying everywhere. Do you want a drink? I can’t do this sober. And remind me again: Is it the right foot or the left we’re amputating? No one tell’s me nothin’ ‘round here …”

I never really thought about being a podiatrist, but I once repaired an Apple music device.

I guess that makes me an iPodiatrist.

I was under what they call “twilight” anesthesia, a state of being half asleep/half awake. It’s the state in which I’ve resided since 2000 when we became parents so I couldn’t comprehend the point.

Maybe I was just too groggy.

They told me the operation was a success, a premature declaration meant to convey I was still alive and could still purchase my shoes in left/right pairs.

Near-term, success will be defined by the discipline I show by remaining in the prone position with my feet above my heart.

So after a year in which it’s been ordered I stay in my house, it’s now being suggested I not leave the bed.

I don’t know how much more inert it’s possible for me to become and still register human vital signs.

Doc says I shouldn’t put weight on my left foot for two weeks. I’m laid up!

It’s an odd designation for a man who’s under doctor’s orders to be laid down.

In two days of being laid up, I’ve watched the Pittsburgh Pirates lose two games by a combined score of 25-4. It’s mathematically conceivable I’ll have seen the Bucs get outscored 350-56 by the time I’m done with being down.

I’m blessed to have an adoring support team here that springs into action any time I yell, “Help!”

Of course, the altruistic novelty of that may begin to fade as they come to realize “Help!” in my world usually translates, “Klondike!” or “Peeps!”

It’s just my way of gettin’ down while bein’ laid up.

Thank you for all the prayers, well-wishes and offers of help.

Rest assured, my feet are in good hands.