World going to hell & all I wanted was a Cadbury Egg 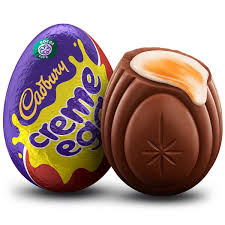 Many frontline medical men and women are risking their lives to save total strangers.

Today, I risked my life because I was craving one of those Cadbury eggs.

The coronavirus crisis is challenging us all to differentiate between wants and needs.

For instance, I didn’t want to put air in my tires, but the “low tire air pressure” snitch light was on and I figured I needed to.

So this morning I drove the 0.06 miles between my office and Sheetz, the near-ubiquitous convenience mart that sells pretty much everything except sheets. I tried to think how I could maximize my time spent in the danger zone.

Did I need batteries? Milk? Bread? Another 100 yards of abrasive TP?

I did not. So I wouldn’t have to enter the store. This was reassuring because we all now know how a deliberate mingle with potential carriers can get you killed.

Still, some carefree part of my brain signaled, psst, you know Cadbury eggs are right there by the register and you love Cadbury eggs.

But what if someone saw me? What if someone took a picture on buying candy as the world was going into lockdown? Would someone candy shame me on Facebook?

I thought of a dozen common sense arguments Dr. Anthony Fauci would make against the purchase.

But the craving was intense.

A big part of my concerns is that the COVID-19 germ has in my eyes achieved mythic status. It’s the uber-virus. It’s bent on world domination. It will wipe out anything that gets in its way. It’s behaving like a Fascist European nation did in 1939.

I remain stunned that we need to keep six feet between us or the germ can leap from an infected carrier to a healthy innocent.

It boggles the mind.

First of all, why would it risk leaving any host that still had a heartbeat? It’s not only impractical, it’s downright rude.

More fearsome to me is the idea that these germs can launch off one person and land on another 4- to 5-feet away.

Chart it to scale and it’d be like me broad jumping from Latrobe and sticking the landing in Denver.

For cryin’ out loud, they don’t even have legs, much less wings.

We’re entering an interesting phase of the crisis. Even the skeptics are becoming convinced this is, duh, something serious. And you’re starting to see predictable social media spats between people who disagree on the best way to flatten the curve.

The whole “judge-not-lest-ye-be-judged” mindset is the second thing to go in a crisis.

People are critical of hoarders and those trying to make an indecent profit off their stash, but to me it makes perfect sense.

The biggest assholes are always going to need the most toilet paper.

I apologize for that. We’re all under a lot of stress.

I wonder if my jocular tone might dismay some of you who’d conclude I just don’t get it, that writing about candy when the whole world is going to hell demeans so much suffering.

But I have to be honest and right then at that moment I wanted nothing on Earth more than that sweet confection.

Does the confession make me a scoundrel? A lout? Maybe, say, a cad?

Or am I sugar-coating it? Will steadfast readers depart? Could this bury me?

Did I lay an egg?

I don't like Cadbury Eggs but always enjoy reading your blog! Hope you and yours are staying well.