TP art in a time of TP hoarding 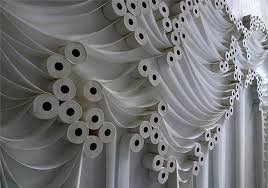 I believe most people use toilet paper without ever devoting even a minute of thought to the men and women who make toilet paper.

I think that stinks — and I’m talking about thoughtlessness, not the reason behind the need for TP.

I think about them often.

I wonder if they’re coy about telling strangers how they earn their daily bread. Like do they say they’re bakers or florists.

Me, I think I’d try and glamorize it.

Never noticed the art? Look carefully. Most every name brand roll has a decorative imprint on it. It may be flowers, patterns or simple grids. And for every one some young go-getter was tasked to bring some soulful creativity to the job.

TP Boss: “Johnnie, I want you to summon your inner Michelangelo and come up with a pattern that’ll really move our customers after their bowels have been really moving. Something playful and warm. I want to see some samples by 5 o’clock.”

Maybe Johnnie has always dreamed of being an artist. Maybe he thinks this is his big chance. And maybe he’s crushed when the boss says, “Sorry, Johnnie, but we’re going to go with the paisley number that Johnnie came up with.”

(I imagine every guy who works at TP factory is named Johnnie).

Hamburg-based Turkish toilet paper artist Sakir Gkebag — and try fitting that and a studio  address on a business card — uses toilet paper as his medium. He
says he seeks to “find the poetry in the everyday.” He uses — some would say misuses — hundreds of rolls of toilet paper to create his whimsical works.

I imagine his Hamburg studio is today being guarded like Fort Knox. And, guaranteed, the name Sakir Gkebag will pop unkindly in my head next time I’m low on paper and we’ve just returned from a family meal at the local Don Patron.

Toilet paper is, as it turns out, yet another reminder of how our innovations have made us softer than our predecessors.

Not only would they ridicule our panic toilet paper hoarding, they’d advise us that just about any object would do for a scrape in a pinch.

Ancient Romans in their communal lavatories used to use a sponge on a stick, which they would pass on to their neighboring squatter.

The notion and given what I know about skid marks it makes me question the Caesarian wisdom of making all the togas from white cloth.

It wasn’t long ago that those answering nature’s call would use leaves, corn cobs, moss — even sea shells:

Young boy: “Hey Nana! It sounds like the ocean in this sea shell.”

Nana: “And it smells like Carson Street after the bars close!”

I gleaned these insights from this revealing Washington Post Ronald Blumer article. Blumer is the author of, “Wiped: “The Curious History of Toilet Paper.”

He says there’s no need to hoard, that TP is a locally grown and processed product that rakes in $2.5 billion each year. You could say it’s on a roll.

“We shall have many problems in the coming months, but a shortage of this ‘greatest necessity of the age’ is not something we have to worry about,” Blumer says.

As we conclude for the day, my thoughts keep returning to the fable of Johnny and his nemesis, also Johnny.

For clarity, I should maybe dub them Johnnie No. 1 and Johnnie No. 2, but given we’re talking about bodily functions, it might only further confuse.

One is bound to be disappointed.

The other will be happy. Bummed in, I guess you could say.

I’d hope Johnnie wouldn’t let it go to his head.

Of course, even the winning Johnnie must come to terms that most people will ignore his creative labors and use it to wipe their asses.

When it comes to toilet paper art, truly everyones a critic in the end, which I guess makes sense because eventually all TP winds up in the end.

Our toilet paper is getting smaller

Poo poohing too much TP

Flush-free toilets in a golden age

good job ! Reviews are a good marketing strategy for a book, get the book visibility and help with sales. For more reviews, try usabookreviewers.com I can also help create a free marketing strategy specific to your genre and book.