Escaping "Escape from Dannemora" & the joys of bustin' out 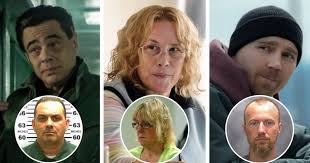 I’d never harbored any political aspirations until one day back, oh, in the mid- ‘90s when I heard one friend put down another more pathetic friend for his inability to secure female companionship.

“Man, you couldn’t get laid in a women’s prison with a fistful of pardons.”

I remember laughing at the funny line, but then becoming very quiet as I succumbed to a silent revery about how often I could get laid under those circumstances. My conclusion:

It was “Escape at Dannemora,” which ran for seven episodes, but felt more 4 to 6.

Four to six years, that is. Parts of it really dragged. But there was enough sex that we hung on.

I wrote about the 2015 upstate New York prison break (link below) and how I was bewildered when one of the detectives told reporters that one of the escapees was had an extra-large penis.

These are topics that never used to concern me when I watched Det. Joe Friday and old “Dragnet” reruns.

Size didn’t seem to matter to prison employee Joyce “Tilly” Mitchell, played by Rosanna Arquette. She was having sex with both inmates as she aided their escape, a crime for which she’s still serving 7 years. She ran the prison tailor shop and was reported to have had sex hundreds of times in the back room.

Rascals at the New York Post dubbed her “Shaw-Skank.”

AGENT: “I’d say lose 50 pounds in two weeks and start auditioning for all the roles the 120-pound Rosanna Arquette is perfect for until she sheds the weight.”

The show did reinforce my contention that breaking out of prison must be one of the greatest feelings in the whole world. I think it’s what makes any prison break so compelling.

To support my argument, I offer the story of golfer Fred Hamilton.

He was serving life in prison in Moundsville W.V., for in 1977 killing a state trooper. He tunneled out in 1993 with what he told investigators was one goal in mind.

He made it as far as Oklahoma before being captured. It was his 13th escape attempt. I well remember the details as I covered the whole thing for National Enquirer.

I remember my barber at the time telling me broadcast interviews made Hamilton seem like a swell dude. “I knew he was a vicious killer, but he seemed like a great guy, the kind of guy you could enjoy a beer with and a day golfing.”

I’ve long wondered what would have happen had the convict made it to Pebble and secured a tee time. I know many officers would be more than happy to provide lethal ventilation to avenge a fallen brother. But I also knew many officers are avid golfers, a circumstance that could lead to conflict.

I imagined Hamilton surrounded by officers on the 18th green while the one with the bullhorn said, “Drop your club and put your hands behind your head!”

And I can’t help but think at least one officer would say, “Pipe down! Can’t you see the guy’s trying to putt?”

The Life & Death of the Prisoner with the large penis

Me & Mandela and doin’ time