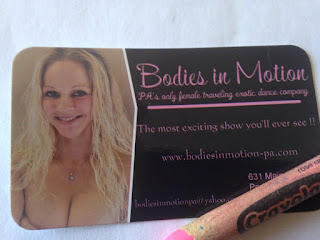 My brain was clouded with morning fog Monday at 6:30 a.m. when I unlocked the front door of the Tin Lizzy and gave it a little push. Only half awake, I barely noticed the business card flutter to the floor.

I picked it up and held it under the light.

It read, “Bodies in Motion: PA’s only female traveling exotic dance company!” Beside it was a picture of a smiling young blonde with an inviting cleavage that appeared cavernous.

A tag line promised, “The most exciting show you’ll ever see!!”

There in the twilight I wondered if that could be true. The boast transported me right back to 2012. I’d taken the kids to the old Ringling Bros. Barnum & Bailey Circus. That was in the Dark (but entertaining) Ages when the Greatest Show on Earth featured trained elephants.

An elephant eats up to 600 pounds of salad fixings each day. In hindsight it would have been useful to know that fact prior to show time.

Because you can train an elephant to stand on its back legs, but you can’t train it to be discreet when it comes to purging itself of that enormous colon-cleansing intake. As it happened, we were directly behind the colossus when nature called.

Then out of nowhere appeared this slight black-clad woman with a snow shovel — and what a pity for a tool that grew up complacent it would only be used to shovel snow.  But it was like she’d rappelled from the rafters. She positioned herself directly in the danger zone.

Now, I’ve seen the Rolling Stones, Bruce Springsteen and most of the great rock bands perform. I’ve seen the Steelers in their glory years and I was there the night Mario Lemieux split the Minnesota North Stars for a Stanly Cup goal that was immortalized into the statue that today is outside the arena.

But nothing was exciting as watching this heroic woman respond to what seemed like a HazMat event sure to devastate the Tri-State area.

I encourage you to read the first link below or ask either one of my daughters to relate the story of the elephant we on the spot named “Dumpo.”

So that was the most exciting show I’d ever seen. How four or five gypsy strippers could ever compete with that, I do not know. But who am I to argue with a little business card hyperbole?

I was curious about when they’d rambled by. It had to have been Sunday evening. Coincidentally, I was in my 3rd floor office most of the morning and afternoon. Had I been here when they stopped, it’s likely this post would have a far jauntier tone and wouldn’t include any mentions of elephant poop.

I didn’t know what to do with the sexy business card. I should have given it to Buck, the owner, who might assume his tenant has given up writing to manage a troupe of itinerant strippers. In the short-term, he’d likely have greater respect for me. But a lie like that might backfire.

So I instead scoured the building for a pen with whore-red ink and wrote: “Hi Buck! It’s Brandi.” And here I drew the little pulsing heart above the “i.” Then I put, “Call me! We miss ya, Stud!” and left it where all the bar gossips could find it.

I think a distinguished gent like Buck would enjoy a little scandal, and I know the rest of us would enjoy watching him try explaining it to his wife Louise.

Maybe I have it all wrong. Maybe they’re motivated by the belief that there are underprivileged pockets of Pennsylvania where men don’t have access to naked women.

Or it could be the wave of the future. Brick ’n’ mortar establishments are going away. Maybe instead of going to the strip joint, having the strip joint come to you makes sense.

I could see myself giving it a shot. I mean what red-blooded American male wouldn’t want to bring the most exciting show ever into his very own living room?

I just don’t see how four or five strippers are going to fit Dumpo through the front door.