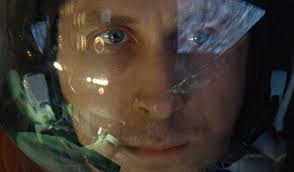 The pressure was too enormous to be contained. The once-ignited gaseous elements demanded release. Lift-off would be achieved.

I’d just endured 138 minutes of “First Man.” I enjoyed the movie, and would have enjoyed it more had I not made the ill-considered decision to consume a heaping plate of refried beans at Don Patron’s just prior to show time.

It wasn’t the faux pas you might imagine. In space no one can hear you fart.

Same goes for the distant rear stall in the men’s room at Latrobe 30 Theater & Cafe.

I’m not saying the movie was a stinker.

Not at all. It’s just that Neil Armstrong, who died in 2012 at age 82, was our most boring American hero. The Wapakoneta, Ohio, native didn’t drink, didn’t brawl. His idea of cutting loose was snacking on a Twinkie.

He was a true straight arrow.

I prefer my arrows a bit bent. Give me Benjamin Franklin, peerless pilot Chuck Yeager, fighter ace and baseball legend Ted Williams. These men had swagger. They were swashbucklers.

Armstrong was a buckle that had never been swashed.

Even his signature line — “One small step for man; one giant leap for mankind” — seems like it hales from the horse-and-buggy era. Had it happened today I’m certain a lucrative endorsement deal would have been pre-arranged and the celestial salute would be something like, “Boy, this would be the perfect time for an ice cold Coke!”

A Blawnox friend — hello Greg! — said I was being shortsighted, always a possibility when the climatic scene takes place 238,912 miles from the planet earth.

He said NASA engineers had to re-fit the seats of the astronauts to accommodate the enormous testicles of men like Armstrong, Buzz Aldrin and Michael Collins. I get that.

But the earthbound half of the film hints that part of Armstrong’s motivation for being an astronaut was to escape the tedium of routine family life. I know lots of beleaguered spouses who say they need a little space, but c’mon!

The film is visually fantastic, but even parts of that struck me as redundant.

Sounds to me like my near weekly efforts to accelerate my 2007 Saturn Vue up the Pennsylvania turnpike on-ramp at at the Irwin interchange. And I’m not making that Saturn part up just so it fits with today’s space theme. I really do drive a Saturn.

But I’ll wager the better, more entertaining film will be “Bohemian Rhapsody,” out November 2.

It’s about a truly dynamic earthling who overcame great odds to achieve what even us gravity slaves refer to as stardom.

But what else would you expect from a movie based on a guy named Mercury?

The Future of Sex in space