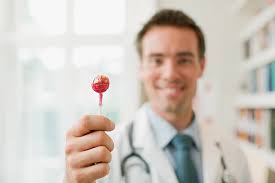 Mary had a pleasant, patient phone voice, non-antagonistic and experienced in knowing if I got TOO testy she could always pass the buck.

Or bucks — $820 of ‘em to be precise. That’s how much anesthesia cost for the August removal of half my thyroid gland and a potato-sized (non-cancerous) lump.

I’m contesting the fee because I never asked for anesthesia and would never have dreamed of having any had I known they were going to charge me a whopping $820 for something I could do myself with salt, lime and a bottle of cheap tequila

“That’s not an approved reason for refusing payment,” she said.

Not approved, but perfectly reasonable.

Should I have to pay for something I didn’t ask for?

The poets say you never know how much you love something until it’s gone. I guess that means I loved the left lobe of my once-whole thyroid.

It’s taken five months for me to feel almost like my old self. That’s how long it’s taken to properly adjust the medications to eliminate a restless anxiety that was making sleep impossible.

At least I think the missing thyroid was to blame. It could very well be that restless anxiety is an obvious side effect of just me being me, a perpetually under-employed writer prone to sublime bouts of laziness.

I should have known I was in for a bad year when when I woke up in March with an engorged tick embedded near my right testicle. If waking up to a tick nibbling your nut’s not a bad omen, I’ll eat my Ouija board.

Besides the infernal tick bite and the thyroid removal, this year also saw the deaths of my Mom and Tom Petty, losses that affected me deeply. I miss Mom, but Petty was still so essentially vital, still headlining Bonnaroo.

Mom? In the grand scheme of things, it was like she’d been consigned to doing Branson matinees. She’d stopped touring. Hadn't had a hit in years. We were prepared for her passing. Not Petty’s.

To top it all off, I now have a Jan. 30 appointment for a $10,000 nuclear MRI — don’t worry; it’s covered — to try and determine the cause of a vexing weakness that’s been plaguing my left arm for two years.

I have difficulty lifting a stack of plates onto the cupboard shelf. I have trouble buttoning my shirts and putting my deadened arm into winter coats. A limp in my left leg from hip pain may or may not be related.

It’s all mostly on the nuisance level of life’s annoyances, the biggest being the left hand is becoming near useless when it comes to crisp typing. That which was once second nature is now chore.

Because another symptom is an occasional mild shaking mostly when it’s cold (and right up to this morning it’s always been cold), a neurologist ordered a so-called DAT scan to see if it’s Parkinson’s Disease. I’m not exactly sure all that the $10,000 test with medicinal nuclear injections includes, but for $10,000 it had better include a complimentary hooker.

My doctors are all optimistic about the outcome. There’s no pain. It doesn’t seem to be getting worse. I’m otherwise fit and the symptoms are more annoying than troubling. A summer MRI and other anecdotal tests show nothing of concern, which leads me to wonder if we’d be better off using the $10,000 to make level the Fun House 3rd floor here at the Tin Lizzy where I come to type.

My posture’s gone to hell since I started writing here in ‘15. The floor’s so damned uneven it’s like trying to type on the deck of a pitching ship.

My fear is I’ll look back on it as my last really good year.

Please join me in being defiantly cheerful about the New Year.

I won’t back down.

Results of my 1st physical … in 18 years