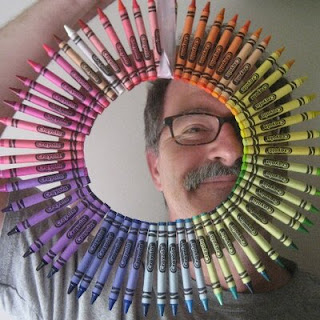 It was, perhaps, coincidental that Twitter expanded its character count during the season of bloat. I liked it better when 8Days2Amish had to conform to just 140-characters. It bestowed even stupid tweets with some humble craftsmanship. And I’m starting to sense these would all be better if accompanied by the pictures I post. But that’s not going to happen.

I hope you’re all having a great day and not letting the insane news blizzard get you down. If it is, I recommend you watch one of The Muppet movies tonight. You’ll feel much better, I swear.

• Golf legend Gary Player has just agreed to provide the promotional foreword for my book about Arnold Palmer and Latrobe.

• My annual dilemma: Do I watch last baseball games or record it and watch 2 pitches every night 'til spring training?

• If I played guitar I'd right now be forming a band I'd call The Mamas & The Papa Doupolisis.

• We are born free & spend the rest of our lives constructing prisons around ourselves. My prison has zero security, but lots & lots of bars.

• I alone know what killed Tom Petty. It finally dawned on him that Bob Dylan's last four releases were Frank Sinatra cover tunes. It’s killing me, too!

• The homebody in me wonders if archeological scholars have ever found a cave emblazoned w/ primitive drawing & motto, “Cave Sweet Cave.”

• I wonder if females who work at the Elmer’s Glue factory refer themselves as Bond girls of if they think that would make them seem stuck up.

• Doing the same thing over and over and expecting a different result is the definition of insanity. Repeatedly being exposed to opinionated people who enjoy smugly pointing that out is the cause of it.

• Isn’t it time someone tried a new switcheroo?

• I know it'll make me feel ancient, but I'm eager for the day I can tell some young whippersnapper, "I remember the days when tweets were just 140-characters!"

• Offering a small child a dollar for every leaf he or she can catch falling from a tree on a windy day is as exciting as any professional sport I've ever watched and the beer is way cheaper. It ought to be an Olympic event.

• I know we're getting ahead of ourselves, but what will they call Louis CK's eventual return to performing without using the phrase "Come Back.”

• On this day in 1851, Herman Melville's epic novel was published forever more leaving the curious among us to wonder if fans of the Grateful Dead are called Deadheads what does that make those of us who revere Moby Dick?

• I wish media would cease referring to mass murders as shooting "sprees." Sprees connote something joyful, happy. These are rampages.

• I’m growing nostalgic for the bygone days when I couldn't name the Treasury Secretary if you'd offered me a fresh $100 bill. Now, not only am I fully conscious of him, I know people are saying he's married to a Disney villain.

• I welcome the conversation we're having about harassment and sexual abuse while being chagrined over all the mixed feelings men like me are bound to have when we watch movies like "Animal House.”

• Scars are life’s passports to show where we’ve been and how we’ve lived.

• If a woman or women don't soon accuse me of sexual harassment i fear people will begin accusing me of either having squandered my life being disinterested in sex or, worse, being, yikes, a gentleman.

• I’ll respect craven NFL greed-meisters more if one day they promote a throw-back uni day where the Baltimore Ravens dress as the Cleveland Browns and play a game against the Tennessee Titans dressed as the Houston Oilers.

• Gun violence is so horrendous and rampant that news of a serial killer is on the loose strikes me as quaintly old-fashioned.

• My Thanksgiving prayer this year included a request that God please tell Tom Petty we really miss him.

• In my on-going attempt to help America confront her homophobia, my next book will be an unauthorized sequel to where Andy & Red take their relationship to its logical conclusion, marry & adopt children who help them run an artisanal Mexican goat farm.

• I enjoy the reactions of bus stop strangers when I rush up and desperately ask if any of them have change for a nickel.

• Because I believe words matter, I propose we by acclaimation change the name of the Pakistani capital from Islamabad to Islamagood.

• I think it's so cute when Trump fans say everything will be all right if he'd just stop tweeting.

• Historian David Halberstam was writing about the fall of Gen. Douglas MacArthur when he cited Euripides who in 480 BC said, "Those whom the gods destroy they first make mad." Can anyone help me find a current prospect? Anyone?