"Lucky Lindy" was a bigamist; Neil Armstrong a bore 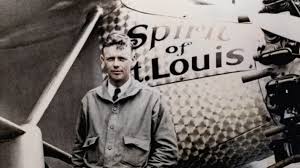 So as an antidote to so many stories of so many men behaving so badly, I was reading a book about Neil Armstrong, our premier astronaut who, it seems, never even once entertained a single dirty thought. Thus, his biography is a bit of a bore.

Armstrong, who died in 2012, never once sought to capitalize on his historic fame. A man celebrated for in July 1969 being the first to step on the desolate surface of the moon lived his entire life as if he’d never find any human fulfillment in Vegas.

I kept waiting to learn if he ever cut loose and maybe snacked on a Twinkie.

But the Jay Barbree book, “Neil Armstrong: A Life in Flight,” was not without merit. For instance, I scored a dandy brain barnacle about another American icon.

A brain barnacle is what I call trivial facts powerful enough to survive a cranial power spraying. Once grasped, they never depart. Guaranteed, this one is something I’ll bring up every time I hear the name Charles Lindbergh.

Turns out Lindbergh was a bigamist. And not a little bigamist. He was a big bigamist.

Who knew a man who became famous in 1927 for the first trans-Atlantic flight had so much in common with so many 21st century NBA stalwarts?

I learned this after reading how Armstrong was honored when Lindbergh showed up July 16, 1969, to watch Apollo 11 lift off for the moon. I was surprised Lindbergh was still alive in ’69. He seemed to me to spring from an entirely different epoch. But I was mistaken.

He was 25 in ’27, thus 67 at lift-off. He’d die three years later of lymphoma complications in Maui, where he spent his final years — and he’d been getting laid years before landing in Hawaii.

Yet his life after the flight that made him famous was spackled with darkness. How much of that was a reflection of having had his 20-month-old son, Charles Jr., kidnapped and murdered is one for psychological speculation.

I was moved to look up Lindbergh to confirm my recollection he was a Nazi sympathizer.

He was. A moralizing anti-Semite, he campaigned vociferously against FDR and any argument America should enter WWII on behalf of Britain and proudly wore the Order of the German Eagle presented to him by Hitler henchman Hermann Goring.

And through it all he espoused the sanctity of holy matrimony and derided womanizers for their petty infidelities.

Here, apparently, the pilot was just wingin’ it. Because in addition to the six children he had with his life-long wife Anne Morrow, he fathered seven more to three European mistresses. On his deathbed, he wrote letters to the women imploring them to preserve his silent hypocrisies beyond the grave.

As the truth began to emerge, Reeve Lindbergh, his youngest daughter wrote, “This story (of her father’s double life) reflects absolutely Byzantine layers of deception on the part of our shared father. These children did not even know who he was! He used a pseudonym with them (To protect them, perhaps? To protect himself, absolutely!)”

So that’s the warts ’n’ all story of one of the most venerated men in American history, just another male icon laid low it seems by unstemmed surges of excess testosterone.

And I’m left to wonder if the only way to keep men grounded is to send us all to the moon.

50 shades of my kinky sex life