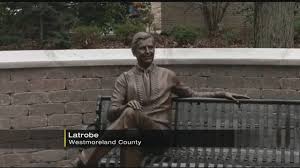 It was 4:45 yesterday afternoon. I was home and Val could sense I was beginning to feel anxious. I had somewhere I had to be.

Was I late for Happy Hour?

No. I was late for prayer.

In some ways I was late for an Unhappy Hour.

I’d accepted an invitation to attend a prayer service in recognition of the opioid abuse crisis that’s poisoning all America. It’s happening in big cities and small. And it’s happening right here in Mister Rogers’ Neighborhood.

Fred Rogers was born here in Latrobe in 1928 and devoted much of his 73 years to ensuring the well-being of his beloved hometown. He did this while simultaneously doing the exact same thing for the entire planet.

The Greater Latrobe Ministerial Association chose to host the service under the bright autumnal sunshine in the Fred Rogers Memorial Park under the smiling gaze of Fred’s statue.

It was appropriate for reasons I suspect I alone knew.

See, I know a secret about Fred Rogers, one I’ve been reluctant to share since, oh, about 1994, when I was paid to share it with 6 million strangers.

Fred Rogers did time in rehab.

That was the story I wrote for National Enquirer.

I remember in vivid detail how I secured the facts. I’d been sipping beers with Paul and Jimmy Plazza, the late owner of The Lantern, a popular Latrobe tavern that once sat on the spot that’s now the senior living facility where my dear mother spent her last year.

The bar phone rang. It was Val calling to say my Enquirer editor called with an assignment about Saint Fred. I was instantly dismayed. I correctly figured it would be something unflattering which my revealing would make me a pariah among certain elements of Latrobe society.

As you’re about to learn, none of those elements were right then drinking hootch in The Lantern.

I told Paul. Sitting and overhearing about four stools down was Dickie Kemp. He died a few weeks ago, relatively young — I don’t think he was 60 — of natural causes after many years of indulging abundant vices. We all liked Dickie very much.

He heard the name Fred Rogers and piped right up: “Fred Rogers? I was just in rehab with his son. I met Fred when he’d come to visit. Great guy. What’s the story about?”

I pulled a fifty out of my wallet and told Dickie to slide on down. I’d be buying all night. Just like that, I had my “A” source. I just sat and listened to him tell me his story of how he was kicking one addiction while I was abetting another.

The thrust of the story was how the scourge of drugs can happen to even the most loving of parents. But the best part was how Fred, an ordained Presbyterian minister, set up an impromptu ministry right there in the rehab rec yard.

“When we saw him, everyone started cracking up and mocking him. A lot of these guys were hard core junkies,” Dickie said. “But one-by-one, every one of these low lifes went up to him and started telling him their stories. And one-by-one, they all started bawlin'. He just had so much compassion. He was saving lives.”

Did you see Sunday's “60 Minutes” report? I can’t remember being more appalled by a news story.

Most of the news that appalls is instigated by some low life. What’s happening with Congress, the DEA and their drug distributor overlords is being conducted by scores of people with respectable pedigrees. They’re educated, attend church, serve on boards of prestigious charitable organizations.

And they’ve sold their souls to medicate ours.

Are we all doomed to live in an age when the low lifes are the leaders?

That evident greed so tips the scales over common humanity makes me for the first time ever proud to be poor.

My pastor told me she was recently summoned to the hospital to inform three young children their 29-year-old mother had died. The kids will be raised by their grandparents. Their father ODd years ago.

An attending friend told me he knew of the deaths of six classmates in the last few months. He’s 38.

Every single day the local obituaries feature another smiling face of someone too young to die.

This is Latrobe, Mister Rogers’ Neighborhood, the town we’ve chosen to raise our children.

So what do I hope to accomplish? I don’t know, but I hope prayer helps.

I do know it’s all hands on deck.

There were about 30 people there Thursday. I hope double that are there for the next one Dec. 14 at Latrobe Presbyterian Church.

I fear a day is approaching when the dead outnumber those still left to care.

Doin’ drugs at the ol’ drive in

The killing in Mr. Rogers’ Neighborhood