Keynoting in my beloved "pimp" shoes 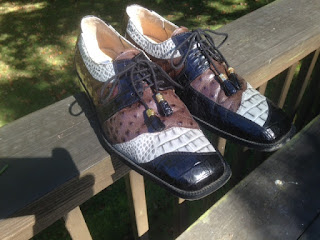 It’s been almost two weeks and my sails are still filled by all the heady compliments I heard at my Columbus keystone before 200 associates of National Church Residences.

People said I was great.

Note the tense: I was great.

Nobody said I am great.

The only thing I can figure is someone in the audience must have been texting my family.

It’s a real joy to be given the opportunity to talk in front of that many people and have them repeatedly interrupt with laughter and ovations.

Best part? It’s now all on YouTube. The hotel had a videographer film the whole shebang, including the 20-minute meet ’n’ greet at the end where 50 people — 50! — lined up to buy crayon-signed copies of my book.

I whittled the 45-minute talk down to 12 minutes. This is the link. I invite you to give it a skim. There’s no nudity — you’re welcome! — but I do swear and people enjoy profane titillation.

I think it’s the perfect promo for me. It shows a good-sized crowd reacting enthusiastically to my every punch line. It shows humor, poise, compassion and heart. The only way it could be better is if it showed the shoes above.

Ah, yes. Bask in them. They’re Giorgio Brutini, maker of “contemporary shoes for confident men.” I only wear them to events where I’m promised a big paycheck. They never fail to earn flattering attention. It certainly happened in Columbus.

It was after my talk and I was passing by a group of five women who’d heard me speak.  We smiled and nodded. As I passed, one of the senior women said to the group but loud enough for me to hear, “Now, those are the kinds of shoes only a real man can wear.”

She wasn’t flirting, I don’t think. It was more like she was instructing her younger friends so next time they saw shoes like mine on a man like me they’d know they were seeing something to behold.

I say she wasn’t flirting, but after I bowed my head in dapper acknowledgement of her compliment I put a little turbo wiggle in my butt for a walkaway encore. Of course, I overdid it and almost tripped, which would have given the ladies a chance to laugh all over again for all the wrong reasons.

Then I called my wife.

I had to tell her. See, these shoes were once a controversial subject in one of those matrimonial tugs-of-war over spousal tastefulness.

I paid, I think, about $150 for them in 2002 at Kamps. It may surprise those who know me for dressing like a guy always ready to spring off his bar stool to help gut a deer, but when I have dough I invest in nice clothes.

I appreciate the importance of looking swanky.

It was something I only sensed in 2002. I remember the salesman having to persuade me they weren’t too flashy. “Someday,” he said, “you’re going to want to make a dashing impression on influential strangers. These shoes will do that without you ever even having to open your mouth!”

But when I took them home, Val said things that gave me cold feet, an ironic turn considering the topic was brand new shoes.

I was 39, but had yet to establish any real ego so, deferring to her sensibilities, I put the shoes back in the box and headed back to the mall. I was woefully unprepared for the counter argument that awaited.

The salesman was furious. “She’s crazy! These are marvelous shoes! I’d be doing you a disservice if I let her goad you into returning these!”

I remember feeling tremendous pressure. Do I side with the mother of my children or some stranger who earns his living by carrying a steel shoe horn in his shirt pocket?

What I should have in hindsight done was tell him, yes, he was right, it was high time for me to man-up. Then depart the store for another hour and returned to sheepishly say she’d ordered me to again return the shoes. I could have done this repeatedly until either the store closed or he got fed up enough to bitch slap me into submission right there beside the imported loafers.

You know how this story ends. I took a stand. And a walk.
In my new shoes!

They remain one of my most proud purchases. I usually wear them with black pants and black shirt under a charcoal blazer. It’s all very understated.

I can’t see myself ever getting rid of them — for strictly professional reasons. They make a great impression

And you just never know when I might one day need them to satisfy an adolescent ambition to pimp.

Email ThisBlogThis!Share to TwitterShare to FacebookShare to Pinterest
Labels: humor, Kamps Shoes Westmoreland Mall, speaker, Use All The Crayons