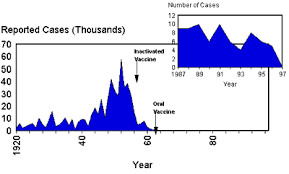 I can see people’s postures improve when I start to tell them why my book is free. I tell the story anytime I’m asked to give one of my presentations.
It’s right there on the first page of every book under the headline: “This Book is Free.”
The paragraphs invite anyone who is struggling to e-mail me and I’ll send them a copy of the book for free.
“Rodell doesn’t believe a book that, at its heart, aims to help people be happy should be withheld from anyone over a few dollars. ‘It’s said the best things in life—love, friendship, laughter—are free,’ Rodell says. ‘I don’t presume this book is among the best things in life but, by God, there’s nothing to say it can’t keep good company.’”
I’ve responded to more than 500 requests so far. I don’t even charge postage. I’m very proud of that.
The altruistic inspiration is Dr. Jonas Salk and the cure for polio.
It is one of the greatest stories ever told.
During the 1950s height of the Cold War, the fear of polio outbreaks were second only to the fear of a Soviet nuclear attack.
When one case of polio was reported in town, every resident self-quarantined. Neighbors would slam doors in the faces of friends. Pools would close. Churches were empty. No one would leave the house until the outbreak ran its deadly course.
Remember the Ebola panics of 2014? Those involved three people and zero fatalities.
In 1952, a polio outbreak killed 3,153 and left 21,573 with either mild or disabling paralysis. Nearly all the victims were children.
The whole terror passed almost overnight when Salk (Pittsburgher!) found a cure and gave it away for free.
A nationally-televised Edward R. Murrow news show featuring Salk was treated like a national holiday. In it Murrow asked Salk about the vaccine’s patent.
Who, Murrow asked, owns the cure?
“The people, I would say,” Salk said. “There is no patent. Could you patent the sun?”
What he was saying is no man should stand in the way of extending something beneficial to greater mankind over crass profit.
I audaciously co-opt his mantle by lumping my crayon book in with Salk’s cure for polio.
“I know people with polio,” I say, “and they are perfectly cheerful men and women. And I also know perfectly physically fit men and women who are just miserable bastards.
“For whom do you think I feel the greater pity?”
Obviously, the soul sick are far worse off.
Yesterday’s news makes me think I should send a crayon-signed book to Martin Shkreli.
He’s the 32-year-old former hedge fund manager, today worth more than $100 million, who raised the price of Daraprim, a drug used to treat a parasitic disease that can kill pregnant women, 5,000 percent.
What had cost $13.50 overnight cost $750. That’s per pill.
After widespread vitriol, Shkreli backtracked and said he’d find a new price.
What he has planned for today, I do not know.
Perhaps he’ll try and patent the sun.
How are we in America today producing business men and women who think that kind of gouging over something that can save lives of pregnant women is conscionable?
Was Shkreli raised by wolves?
Trump?
Worse, he doesn’t seem to sense he’s done anything wrong.
He tweeted the what the considered justifying lyrics to an Eminem song: “And it seems like the media immediately points a finger at me. So I point one back at ‘em, but not the index or pinkie.”
In 1985, President Ronald Reagan declared May 6 “Jonas Salk Day.” His proclamation to Salk in part read: “Today, polio is not a familiar disease to younger Americans, and many have difficulty appreciating the magnitude of the disorder the Salk vaccine virtually overnight wiped from the face of the Earth.”
When Salk died 10 years later at the age of 80, he was eulogized as one of the most beloved men on Earth, a man who saved the lives of millions. Who knows? Maybe mine and yours, too.
I wish no ill on Shkreli (well, nothing too lethal), but if he were to die today he’d be one of the most despised.
Rich, yes, in many ways, but soulfully destitute in so many others.
I apologize if today you checked in here hoping for humor.
I’m just not up to it.
Plus, I’m fearful if laughter is truly the best medicine, men like Shkreli may have filed for a patent.

Related . . .
Dr. Nancy and the Ebola River Blues
Giving away my book a blue chip idea
Steve Jobs: American iCon
Save health care: Dock doc pay!
Who’ll take on Trump & what Cher has to do with it

Ol Martin may have some Karma heading his way-http://www.newsweek.com/martin-shkreli-drug-manipulation-daraprim-retrophin-375416. Hope he gets some serious jail time!

I'll dance a jig if he does. Loathsome individual.