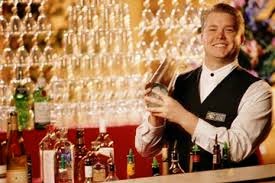 (692 words)
Well, cancel the tour buses bound for Latrobe. Tell TMZ they’re too late. The great Chris Rodell Bartender experiment is over. My brief tenure has come to an abrupt end. They were six of the best nights of my life.

Well, six of the best sober nights of my life.

How did I find out? Did a co-worker spill the beans?

No — and Pond beans, by the way, are the best damn beans in town!

What happened was I walked in to pay Dave my rent and back behind the bar was a beautiful young girl in a pretty dress.

I took one look at her and understood I never had a chance — and not just because it’s been years since I could fit into a dress like that.

I know this girl. She’s been to my house. She used to babysit our daughters.

Now, there’s a chance she’s gonna be babysitting me!

And I thought I had a disorienting career trajectory.

She’s the daughter of Dave’s girlfriend and has for years tended bar at another joint to pay for her nursing tuition. A dispute with her crabby boss led her to ask Dave if she could work some nights here at The Pond.

She’s a great girl and I’m very happy she will be in there to inebriate me and my buddies. Her boyfriend is going to be working some nights, too. It’ll completely makeover the bar’s personality and give it a welcome injection of friendly new blood.

It’s been the most tumultuous summer I can remember at a place I go to seek sudsy serenity.

A good friend of ours suddenly quit after 12 years. Dave asked if I could step in to help. Even though it’d been 27 years since I’d lasted tended bar, I said yes right away because saying no to Dave in that situation would have been like Rudolph saying no to Santa.

What will I miss?

• Telling my wife and kids I was going out to spend the night at the bar and knowing they’d look at me with a sense of pride, rather than typical shame.

• Tips. I don’t care how much dough you make, a job where you walk out the door with your pocket stuffed full of cash always leads to a bounce in your step.

• Telling people I had a job. Telling people you’re a bartender is so much more concrete and respectable than saying you’re a writer, a job description that immediately makes most decent people suspect you’re either a snob or a scam artist.

• Anticipating how much more interesting "Take Your Daughters to Work" day was going to be for my girls.

What I won’t miss:

• Standing. Second to any movement, standing is the least natural human posture. For me, standing behind the bar for five or six hours was very taxing and another reminder why it’d never be a good idea for a guy like me to enlist in the armed services.

• Trying to remember customers’ names. I wish I could remember names the way I remember lines from funny movies. I can quote verbatim the entire dialogue from movies like “Slapshot,” and “The Naked Gun,” but can’t remember the names of a friendly couple ten minutes after they’ve ordered their pizza. It’s especially embarrassing working with Dave and everyone else seems to excel at remembering names.

• Watching my friends go out to another bar without me. On Friday nights, a bunch of us like to go down to DiSalvo’s Station, a fancy restaurant with a cigar bar, and have a good smoke. I was crestfallen the last two Fridays to hear my friends say they were going to go to have fun without me. Yeah, right. As if.

• Thinking about the bar more than I think about the blog. This is the sixth bar-dominated blog post in four weeks. That’s way too much. But I found many of the topics too compelling to ignore. I hope you agree and thank you for your indulgence on the topic.

So, tonight the natural order will be restored.

I’ll be in the bar, not behind it.

That’s The Pond, a place where everybody knows your name.

About those rumors I’m buying The Pond

“Sing me a song, you’re the bartender”

How I nearly quit my bartending job after Day 3

The Pond’s new bartender: me!

Congratulations on you early "retirement " Chris. The boys will be glad to have you back on the usual side of the bar where your true talents lie.