An exercise in ironic education 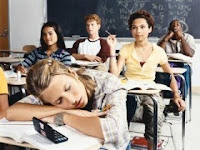 I was explaining to my class the difference between coincidence and the over- and mis-used word, “irony.”

“It is coincidence, not irony, when you meet an old friend on the street outside the building where you both went to school,” I lectured. “Irony is when a vegetarian is eaten by wolves.”

I gave an insufferable professorial smirk and prepared myself to bow to the applause I was sure would follow. It was the fourth week I’ve taught a three-hour creative non-fiction writing class to graduate students at Point Park University in downtown Pittsburgh.

But there was no applause. No appreciative nods.

Later on the drive home I figured out why.

Because from January through May, this group of polite young adults had signed on to bear witness to one of the world’s most colossal ironies -- me teaching anybody how to succeed in writing.

This is the third time Point Park has flattered me by offering me this adjunct position and I think I figured out why. I am to journalism students what a human cadaver is to medical students.

Prospective journalists can examine me, my flaws and failings, and try and forensically determine what killed my career.

I’ve noticed that the students come alive with interest when I tell them stories about how I’ve cratered once-thriving magazines with my questionable ethics, sloppy fact-checking, or reckless and exorbitant expense account sprees.

True story: Details magazine in 1999 closed four days after I’d submitted a $5,450 reimbursement bill for a five-day frolic I enjoyed while on assignment to cover a mundane TV programming convention in New Orleans. I got paid, but the magazine didn’t recover to publish another issue until 2002.

But students stare out the window like Gitmo detainees whenever I tell a story about a rare career accomplishment from long, long ago when I used to have them.

I just can’t help myself. They are truly a captive audience. Again, the Gitmo detainee analogy is apt. I’m like the righteous Army chaplain who preaches to fanatical Muslims about the everlasting importance of being good Christians.

It’s worse for my students than it is even for my poor wife and children. Family face no repercussions when they leave the room or shove their fingers in their ears when I launch into another rambling story.

Getting up and leaving isn’t an option for my students. I could fail them for that. I do wonder if by week six some of the weaker students might crack and agree to submit to waterboarding if it’ll get me to shut the hell up.

I might enjoy that quid pro quo, too. Besides being a bore, I also have a mean streak that makes Dick Cheney seem mirthful.

Again, ironies abound. Just last night I spent about two hours talking about the importance of, get this, being concise!

Yes, I went on and on and on about why they need to be brief. I read them long passages from Hemingway and lectured ad nauseam that the only way to get ahead in writing is to write less.

To stress the point, I even assigned them dainty little 150-word essays in praise of something brief with no sentences longer 15 words each.

In hindsight, I suppose it would have been funny if I’d have told them to make the brief essays no less than 2,500 words.

Then there's this: The lengthy lesson about the importance of being brief was given by a man prone to wearing boxers.

How ironic.
Posted by Chris Rodell at 9:29 PM

Only $1000 per day in New Orleans? Considerable restraint, I'd say!

Next time you go anywhere on an expense account, you're taking me with ya! If you're sniffing at $1,000 a day, I want to see you in action!

Having taught writing for 14 years, I applaud you. I know where you stand (or sit, if that's more you). Love the irony of blathering about conciseness.

Thanks, Rachel, and my friend with the words that are to me indecipherable. I'm going to try and find a translator and hope it says something nice.

You have my admiration Rachel. That's a wonderful calling and goes hand in hand with writing. Glad you liked the post! I'll struggle to resist reading it to my students!

Great post, Chris and how admirable to teach. Happy SuperBowl day to you. I'm waiting for the Who to rock. : )
x0

Thanks, Kimmie. Always so good to hear from you. And The Who did rock!

Well, for the record, I don't teach anymore. Notice the past perfect tense--been there, done that. Never got a t-shirt for it, though.