Time on my hands & everywhere else 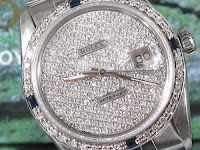 I’m thinking of getting a $75 tattoo of an $18,000 Rolex on my left wrist. It would appear jewel-encrusted, waterproof and would make even the stylish wafer thin ones look clunky by comparison.

I think a really nice timepiece is a great way to impress strangers, and I don’t have the otherwise means to do so without deception.

Plus, I have so many clocks and time-telling devices in my life that I no longer have any idea what time it really is.

Right now, the clock on my laptop says its 10:36 a.m., but if I raise my eyes slightly to the digital display on my stereo (now playing Sgt. Pepper by The Beatles) it says it’s 10:28 a.m.

Perhaps it’s fitting that my futuristic MacBook Pro is vaulting ahead in time while my Bose Soundwave plays “When I’m 64,” a 42-year-old ditty about the pending intrusions of the doddering ages (and did you catch how that last sentence shows what a materialistic brand name-dropping dandy I’ve become?).

I have three watches ranging from cheap to middle-class spiffy. With my car clock, cell phone, several scattered clocks throughout the home and the notoriously corrupt homewrecker in my favorite tavern and it would seem I’m a man with all the time in the world.

Yet, I can’t seem to find the time to precisely synchronize the dozen or so I rely on for essentials like picking up the kid at the bus stop or being on time for the weekly golf match.

Is that posture the solution?

I’m always either late or early. Never right on time.

I’m either hurrying to get someplace or just sitting stationary killing time, a once favorite pastime of mine. That was before I read how Henry David Thoreau wondered if it was possible to kill time without injuring eternity. It brain barnicled the instant I read it and still nags at me whenever I have time on my hands.

Thoreau’s philosophical petard makes my possession of so many scattered and disagreeable time keepers seem like a crime against humanity.

I feel driven to always be doing something productive. No longer do I kill time.

Exchanging my unwieldy array of Babelonian time pieces in exchange for a time tattoo of a really nice watch would change all that.

It’d be a practical fashion statement, people would appreciate the eccentricity of it, and it would have the nifty benefit of relieving the pressure to always be punctual.

I’m sure I’m not alone. We’re all so stressed by constant nano-second reminders that time is running out.

Could fancy wrist tattoos ease some of our pressing worries? Is it an idea that will eventually sweep the country?

Only time will tell.
Posted by Chris Rodell at 1:01 PM

Thanks, now I can't get that song line outta my head -- "Tiiiiime, is on our side..." But I do love tattoos.

Funny. I never wear a watch, but I'm always on time. I guess I was just blessed - or cursed - with an excellent internal clock. Love the tattoo idea, though.

Angie, do you prefer the Stones version or one of the older bluesy ones? I'm a Stones man, but with that song, I kind of lean toward the originals.

Thanks, Suldog! I envy your internal clock. Great knack to have.