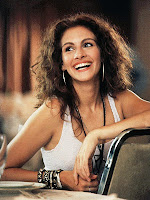 I’m not going to be among those who today are commenting on last night’s new episodes of “Jon & Kate + 8.” I’ll leave it to others to speculate on the randy shenanigans of serial cheater Jon and to what extent his shrewish wife drove him to it.

No, on this day it falls to me to discuss journalism ethics.

This ought to be funny because I have none.

But I’m uniquely qualified to tackle the subject because the issue here is the oxymoronic topic of tabloid journalism ethics.

She slept with him.

“I didn’t mean for it to happen -- it just did,” she gushed. "I went to do a story on Jon and ended up falling for him.”

I don’t understand how girls keep falling for a rather dumpy looking chap with more baggage than a Samsonite warehouse, but that’s beside the point. Citing a conflict of interest, she quit her job with Star to follow her heart and the man she considers dashing.

As a tabloid veteran of who wrote more than 1,000 swashbuckling stories for National Enquirer from 1994-2000, I wish Kate would have called me for advice.

I’d have told her to continue screwing Jon in every sense of the word. Quitting your job when you have pillow talk access to one of the biggest tabloid stories in the country?

In the tabloid world it’s considered highly unprofessional to be so professional.

Even my wife understood this.

That’s how I ended up with my hands in Julia Roberts’s pants.

It was October 28, 1997, Julia’s 30th birthday. She was having an exclusive birthday party about a private yacht cruising the Chesapeake from Annapolis to Baltimore’s splendid Inner Harbor.

“We need you to get to Maryland right away!” he said. “We’ve snagged a personal invitation to Julia Robert’s 30th birthday party. You need to get your ass down there.”

I did better than that. I took my wife’s ass, too!.

Ah, those were the good old days.. The Enquirer was a demanding master, but never stingy with the expense account. I knew I could take my wife and we’d have a wonderful time in Baltimore with or without the Pretty Woman.

But I was determined to get on board that boat. I thought presents would add a semblance of reality to my scheme to thwart what was bound to be a tightly controlled arrangement. The invitation was legit, by the way. Someone in her inner circle had secured an lavishly embossed invitation and for whatever reason -- Cash? Revenge? -- gave it to the Enquirer.

So we stopped by a Baltimore gift shop and charged armfuls of crab-themed delights. There were spices, a T-shirt, earrings, cookbooks and some crab-covered silk boxer shorts.

Val was excited, too. Neither of us were big fans of the toothy actress, but it’s easy to be dazzled by the proximity of fame and fun.

It was an interesting time for Roberts. She and dorky singer Lyle Lovett had recently divorced and the Enquirer was reporting she had been dating a string of regular guys.

I told this to Val and said it was important for her to remember that I was on duty here and might need to behave in ways that might be considered immoral and outside the bounds of our marriage.

In short, I said I might have to -- in the line of duty -- screw Julia Roberts.

But I wasn’t going to screw The National Enquirer.

That’s where Kate Major made her mistake.

Val gave me permission to make out with Julia, but no more, an understanding compromise on her part, I felt.

Of course it didn’t work out. We weren’t on the guest list. They hustled us off the pier and the only pretty woman I got to make out with that night was my own wife.

But we left all the presents and told the guards to tell her they were compliments of National Enquirer.

It wasn’t until the drive home that I realized that I could forever say I had my hands in the star's pants. I was sure she’d like the crabby silk boxers best of all.

It was just my luck that it happened at least three hours before she even knew the pants were hers.

Kate Upton in Latrobe! When a supermodel comes to town
Posted by Chris Rodell at 12:20 PM

Ah, the days of the big expense account or the cheap college town beer. Gotta love them both. Thanks for the entertainment!

Yes, Tom. Expense accounts and cheap college beer. How I wish I had more of both. Thanks for checking in, buddy!