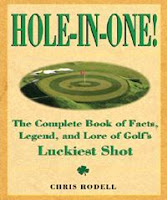 Today The New York Times bestowed upon me the de facto title it usually reserves for the likes of Kissinger and Greenspan.

I am, in the eyes of The Times, an expert.

And, lucky me, my expertise isn’t in foreign policy or the more arcane aspects of the miserable economy.

I’m The Times expert on the ace.

I’m the guy Times “On Par” golf writer Bill Pennington sought and quoted when he did the story “Golf’s Holy Grail is Far From Elusive.”

Pennington did a nifty job on the story about the alleged “rarity” of golf’s luckiest shot and how even though about 20 holes in one are made every hour, he’s never had one.

For Pennington, it’s a source of consternation.

For me, it’s a diabolical cruelty.

See, it was in 2003 that I had the idea to write “Hole-in-One! The Complete Book of Fact, Legend and Lore on Golf’s Luckiest Shot.” After some research, I learned there’d never been a book on the one shot each and every golfer dreams of making at least once in their lives.

For those of us who’ve never achieved the goal, the fact nags like an unreplaced divot.

I selfishly believe for me it’s much worse because as an, ahem, expert, I’ve heard thousands of stories of golfers who’ve had an aces. I’ve talked to blind men and women who’ve had them. Men with one arm. Women with no legs. I’ve talked to the sacred and the profane.

Most of them describe the feeling that erupted when the ball dropped in the cup as “indescribable.” I wonder if they’re taunting me.

To me, the ace respresents maybe the one time in life where absolutely every thing went perfect. And it can happen to anyone.

As I told Pennington, “Average men or women can’t wake up tomorrow morning and expect any chance to do something perfectly in sports, like whiff Alex Rodriguez on three pitches. But they could one day hit a golf shot that even Tiger Woods couldn’t best. When you make a hole in one, in that moment, it’s the greatest shot ever.”

Those who’ve made aces often put the lucky ball on the mantles already crowded with pictures of loved ones.

I contend the ace alone remains pure. Even the best children will do things to make blood pressure and insurance rates rise.

But the ace is forever perfect. It gets mentioned in countless obits and many old golfers are buried with the lucky balls in the caskets in the hopes they can get a good tee time someplace in the afterlife.

The analogy I use it is to lucky golfers what pre-teen grandchildren are: Born flawless and incapable of causing angst.

When strangers find out I’m a golf writer who wrote a book about aces, they stop what they’re doing and tell me a story about what for many of them will swear was one of the greatest moment of their lives.

Why can’t I be one of the lucky ones?

Of course, as a New York Times certified expert on one of the world’s happiest topics, you could argue that maybe I’m already plenty lucky. Really, who could ask for anything more?

I want an ace of my own!

Until I get one, the shot will remain my Moby Dick and I its Ahab. Wish me luck.

And may your first or next ace be so wonderful and lucrative that it'll earn a whole chapter in my next golf book.
Posted by Chris Rodell at 6:07 PM

Email ThisBlogThis!Share to TwitterShare to FacebookShare to Pinterest
Labels: "Hole in One, Chris Rodell, Ho Hole in One, Legend and Lore on Golf's Luckiest Shot", New York Times, The Complete Book of Fact