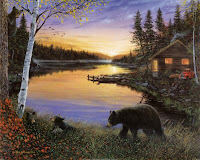 Do you know that forlorn feeling that comes along when one good friend goes away? Now imagine what it’s like when two dozen of them vamoose all at once.

That’s what it’s like the week after July 4 here in Latrobe when The Pond for one week goes dry.

Understand, The Pond going dry has nothing to do with the consequences of global warming. In fact, the impact centers more on individual thirsting.

The Pond is a friendly local tavern that’s miles from the nearest discernible body of standing water. I’ve probably been told a dozen or so times about why a landlocked bar is called The Pond, but the story isn’t nearly as interesting as what goes on in the bar beneath where I work.

I moved my office into a vacant apartment above The Pond in 2007 when trying to concentrate in close proximity to two precocious girls at home proved impossible for a guy like me.

So now I try and concentrate in close proximity to about twenty mostly paunchy and mostly male beer guzzlers.

I still can’t concentrate and that’s a pretty disparate sampling.

I must just be a social person. It’s bad for constructive productivity, but it’s good for having fun.

The office overlooks the rear parking lot where I park my vehicle. On days when the girls come over for lunch, we often scramble to the window whenever we hear a car rattle the gravel.

Tucked safely out of view, we wait until the driver closes the door and deploys his or her -- click! click! -- remote door lock. That’s when I press the button for my car alarm.

This sometimes confuses the driver into thinking he or she has mistakenly hit the wrong button. In a panicky effort to silence my alarm, they’ll sometimes press their own setting off a startling cacophony that helps screen our concealed cackles from behind the drapes.

Of course, the best part about working just above a friendly a bar is that it’s just so handy in case of emergency.

I’ve re-defined “emergency” to include real or perceived writer’s block, the need for inspiration, the sight of more than three cars belonging to my buddies parked outside at the same time, the onset of Happy Hour, the hunger for a tasty pizza, and the understanding that if I don’t get down there for lunch at precisely 11:47 a.m., then I’ll be too late to make a hypothetical bid on the Showcase Showdown.

Mostly my emergencies stem from the lack of giggles that come from working all by yourself.

The Pond is the perfect antidote for that. It has a great mix of characters. There are lawyers, farmers, mill workers, newspaper men, electricians, engineers, teachers and a happy assortment of common small town drunks. There’s chalkboard trivia, good food and friendly bartenders.

From years of old school boozy experience, I understand it takes a special sort of alchemy to mix it all together and make it all work so everyone feels welcome.

This bar has been run for three generations of the Carfang family. Dave runs the place now. Here’s a joke he told me the other day.

His vegetarian diet left him with a very dainty sort of constitution.

He was a philosophical seer of future events.

He ignored common dental practices and that gave his breath an offensive air.

He was (say it fast) a super-calloused, fragile mystic, hexed by halitosis.

How many taverns feature that kind of humor? And how will I cope without that sort of thing for the next week or so?

I know what I’m going to do. I’m taking the family and we’re leaving town. We’re heading on a trip to Washington, D.C., to see the sights.

I want to be clear on this: I didn’t plan a family trip just because I wouldn’t have the company of my good bar buddies until July 13. This is purely a coincidence.

It won’t be deliberate until next year.
Posted by Chris Rodell at 8:54 PM

Email ThisBlogThis!Share to TwitterShare to FacebookShare to Pinterest
Labels: Latrobe, Price is Right, The Pond