Me, Mandela and doin' time 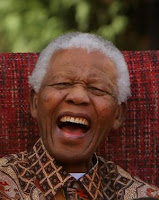 It was only a $15 parking ticket. It had been issued to me on July 3 outside the local public library for parking on the wrong side of the road. Many would have just paid it.

Not me. It didn’t seem fair. There was no sign. It was a holiday weekend on a road between a church and a small town library where my wife had asked me to pick up some books for the kids.

The only way my mission could have been more wholesome was if I’d paused to donate a spare kidney to some sick orphan.

So I took it to the local police chief. We’d never met, but have mutual friends. He looked at the ticket, looked at me, smiled and said, “Let’s let this go with a warning, okay?”

I don’t know why I felt so good, but I had to fight the urge to jump up and click my heels together. It continued a run of friendly run-ins with badge-bearing folks from whom I used to instinctively run.

I’ve also become friendly with a Pennsylvania State Trooper whom I’d met at a golf function. We hit it off and and I invited him down to my local tavern where he proceeded to make as loud an ass out of himself as those of us who don’t carry loaded weapons for a living.

We all had a swell time. At the end of the night, he threw an arm around me and shoved his business card in my shirt pocket. I didn’t examine it until the next day. On the back, he’d written: “Chris is a personal friend/golf buddy. Any professional courtesy appreciated.”

I had to practically rub the Twilight Zone out of my booze-reddened eyes. It was a get out of jail free card!

And it’s just such a sad pity that I can’t think of a single circumstance where I’ll ever get to use it.

I don’t know how it happened, but all the menace of my youth has gradually leaked away. What remains couldn’t make a decent puddle.

Somehow I’ve become good and it seems like such a waste.

Where were these powerful friendships during my hell-raising youth? Where were they when I could have really used them?

It was 1987. All the old gang from college was in town and that meant lots of drinking. Inevitably, things got out of hand and one of my buddies, a Cincinnati lad, got busted for drunk and disorderly behavior.

The haze of history, not to mention multiple Ouzo shooters, fogs the details. I think it was an ill-advised game of toss involving empty beer bottles and a nervous valet, but I clearly remember a big steroid stallion of a cop rudely shoving him in the back of the cruiser.

As I was the semi-sober host, I felt honor-bound to take charge. I asked the officer when I could collect the miscreant.

“I understand that sir, but when, pray tell, can I come retrieve him?”

We went through a variation of this two more times before he growled, ‘Say one more word and you’re goin’ with him!”

You can beat me senseless and throw my shattered body in a dark dungeon until time runs out. But no one will ever incarcerate my inner smart ass.

The very next instant began a lifelong appreciation for the sturdy construction of a well-built American vehicle. He grabbed the back of my head and slammed my chin into the cruiser’s hood.

I’m convinced if had been one of those mid-80’s foreign cars, the force would have collapsed the vehicle and the three of us would have had to perp walk a mile to the two-cell station.

Cell one was occupied by a surly-looking punk. He never even glanced up as they threw the two of us into the cell next door.

I confess I wasn’t unhappy about being there. I didn’t want to go through life without having to endure some imprisonment, if for no other reason than I could feel a kind of kinship with Nelson Mandela.

After about an hour of cellmate giggling -- and it was just giggling -- my buddy broke the ice with unseen Prisoner No. 000001.

He said he was in for a bar brawl, drunk and disorderly. “You guys?” he asked.

Maybe it was still the drunk part of his D&D, but I was surprised to learn he was such a sensitive sort. He was floored and came alive with interest. He asked what made me do it.

“Caught her in bed with a black guy,” I said.

He asked what I did.

“You sure you killed her?”

“I think so. It’s all so confused. All I remember is her rubbing her ass and hollerin' at me.”

I’ve heard stories of men who endure long incarceration. They say they remember the forlorness, the estrangement.

Me, I’ll always remember my buddy trying to stifle all his belly laughs as I spun one of my greatest stories ever, one rich with sordid detail about my criminal life as an outlaw youth.

When they let the two of us go at dawn, we walked past our cell neighbor. He didn’t even look up, too fearful to even fathom an evil so malevolent, so near.

I wonder if even one of Mandela’s nights over 27 years of bitter imprisonment was as much fun as my 12 hours.

He probably ran with the wrong crowd.
Posted by Chris Rodell at 2:17 PM

How am I supposed to suppress my belly laughs here at work?! Great piece CR! Classic. and the Beav was always the one getting in trouble. Remember that one time at Band Camp.....er formal?

Ha! Boy, we sure had our share of fun, didn't we! Quinn's mentioned a fall OU trip. Let's give it another run. Thanks, Tom!

This reminded me of my own college days jail house story, which was also funny, but not as funny as yours.

Hi Bruce. Thanks for checking in and tagging along. I can only assume you used your jailhouse time to further your education in ways that couldn't have happened in the classroom. Have a great week!

CR, My 15 minutes of fame have come to Eight Days To Amish. This is the Cincinnati Lad in question who might have tested an empty bottle of beer for flight. What goes up must come down. Unfortunately, Barney was there. I must say you were a true friend that night and kept me company in the local brig. I bet the cell neighbor has kept that night as a great memory and has probably retold his encounter of spending the night with a wife killer. Memories...Sometimes hard to remember but if you do remember, what a great blast from the past. CYA at OU, OUTLAW BVR