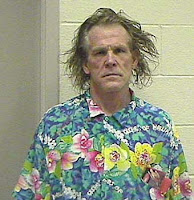 I want my Pennsylvania driver’s license photo to be as repulsive as most celebrity mug shots.

That’s why I was thrilled last week to receive notice that I had four full weeks to get a new picture taken before my license expires. That’s plenty of time for my performance art to bear its rotten fruit.

I’m already on Day 5 of what will be a month-long project to make myself as photographically menacing as indecency permits. I won’t shave. I won’t groom and I’ll practice the kind of sullen glare that makes approaching police officers unholster their weapons. Once I’m done you’ll practically see the cartoon stink lines shooting off my picture.

This is the logical reverse of the way most people prepare for their photo ID snapshots. They primp, they floss and, ugh, they smile coyly at the camera like it’s a glamour shot destined for an illicit lover’s boudoir.

But friends and loved ones rarely get even a peek. In fact, the only people who’re ever likely to see this picture are trigger-happy police officers, surly clerks or the despotic airport minions who hold our timely lives in their hands.

And it makes zero sense to robotically possess and produce a beaming piece of laminated sunshine whenever the trouble starts to brew.

Think about it: The only time you ever need to show your driver’s license is when someone thinks you’re up to no good. You’re either driving erratically, your check is suspect or accountability is required to prevent some awful airline crime. These are times of inherent tension. One wrong move and you could be arrested, embarrassed or detained.

In each of these instances, it’s likely you’ll be appearing several grades below the perky attractiveness exhibited in your photo ID.

The only time a smiling license makes sense is when a lottery official needs to verify your winnings and when was the last time you or anyone you know had that kind of luck?

So it makes sense to scowl. I’ve been doing this for the past 20 years now and you’d be amazed at the number of times my criminal looking photo has contrarily gotten me out of trouble.

Because in my life I am generally friendly and presentable. I smile at strangers, usually dress nicely and maintain a pleasant and unthreatening manner. I’m the exact opposite of the guy pictured on my ID, which is the very first thing officers see before they even look at the real you.

I’ll never forget the double and triple takes I got a bunch of years ago when an officer pulled me over late one night on my way home from the tavern. His alert eyes widened at my picture. He tugged at his holster.

His flashlight illuminated a picture of a dangerous hooligan with a scraggly four-week growth. The man in the picture had bloodshot eyes. His cheek bore a fresh pink scratch. His ungroomed nose hairs Rapunzeled down in front of his lips like scrub straps dancing in a car wash.

It was my masterpiece.

Me, I smiled at him like I was a favorite nephew. I’m convinced he saw me, the criminal picture and subliminally concluded I was once fully corrupt and had now turned my life completely around. Maybe church or a good woman had set me straight. Maybe I was now a productive member of society who’d been out for a nostalgic night of billiards with the old gang down at the neighborhood pub.

Of course, none of that was true, but who among us wants to erect obstacles in front of someone striving to improve? Certainly not this officer.

Not only did the guy let me go, he practically blew me a kiss. And that’s not uncommon. Airline counter personnel are even more receptive to my Pygmalion transformation. We joke, laugh and I usually get a sweeter seat assignment.

The only time it’s ever failed me was back in about 1988 when I was arrested -- I swear I was innocent -- for drunk and disorderly conduct. I later argued in vain before a magistrate that I’d been drunk and disorderly for the entirety of the 1980s so the arrest was arbitrary enough to warrant dismissal.

That was a long time ago. I’ve learned since then. I’m older, wiser, more mature. I’m a sober and composed member of a society cheerfully intent on working for the greater good. I’m the kind of guy who helps little old ladies across the street and lost kittens down from trees.

It’s just that for the next four weeks I won't look anything like it.
Posted by Chris Rodell at 2:20 PM