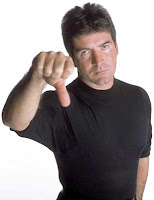 I disagreed whenever my late father used to tell me I had a real talent for writing. It’s a character defect, I’d argue.

Those with real talent enjoy robust professional obligations. Those with character defects squander hour after hour in lonely self-indulgent pursuits with no perceptible results.

Kind of like those of us who regularly blog.

I used to consider this blog the journalistic equivalent of a lemonade stand. Then one day it dawned on me that even stupid kids don’t give the lemonade away for free.

I always tell my students that I know I’m not working hard enough unless I receive at least a rejection letter a day. If that’s the proper measure, then I’ve been working my tail off since 1992 and have been on a real roll since September.

It has me once again wondering if it isn’t time to do something less yoked by near-constant rejection and more likely to lead to actual income. Something like, you know, sell lemonade by the glass.

This occurred to me over the weekend when my pitch letter for my rejection-magnet of a novel was critiqued on the “Query Shark” blogspot. It’s agent Janet Reid’s popular and useful writer’s website that gives professional feedback to wannabe authors like me who’re seeking agents or publishers.

To me it’s like sending your heartfelt best stuff to Simon Cowell on “American Idol.” The feedback can be brutal.

Now, I understand that may seem like pretty tame stuff to those of you who work in factories, the military or for all I know cupcake bakeries. Remember, I’ve only had three real jobs my entire life and one of them was at Pizza Hut.

But I know writers are notoriously thin-skinned and have enormous dirigible-sized egos when it comes to our work.

Take me, for example. Every single time I turn in an essay, assignment or book proposal, I become exactly like like Ralphie in the scene from “A Christmas Story” where he turns in his theme. I imagine the editor dancing across the room euphorically singing, “A-plus! Plus! Plus! Plus! Plus!”

It’s never happened and it didn’t happen with Query Shark. Here’s a key paragraph from my query:

“The Last Baby Boomer” is my 209-page novel about the life and death of the last baby boomer, Martin J. McCrae. Because his impending death will symbolically tombstone a generation known for selfish excess, the 117-year-old McCrae agrees to be part of a lottery ghoul pool. Contestants pay $25 to be in a museum suite with him for 15 minutes. If they are present when he expires, they win the multimillion dollar jackpot. One problem: McCrae won't die.”

"Word count, not page numbers. Always . . . Tombstone is not a verb. Not now, not in the future, not ever . . . If the novel is simply waiting for him to die, you'll need something else to hold our interest.”

I was most stung by her grave comment that tombstone cannot be used as a verb. For you non-writers out there, “symbolically tombstone” is one of those phrases writers coin with such self-satisfied glee that we immediately begin twirling around the room in our purple smoking jackets whist taking deep soulful snorts from our Tiffany brandy snifters.

Because that’s just what writer’s do

But on this day, there would be no retort. The Query Shark moves on. I’m invited to rewrite the query and to resubmit for consideration. Some of the reader comments were wonderfully kind and supportive and a few even appreciated my controversial use of tombstone as a verb.

I’m in one of those professional troughs where I feel like giving up. There’s little hope and even less work. I used to pray that I’d be successful. Now, I have to fight off the urge to pray that God will just slay all my ambitions.

I cannot give in to those defeatist impulses. It’s too late for me to do something sensible like enroll in plumbing school. I will presevever. I will rewrite my query and hope anew that the valuable insights I’ve gained will lead to publishing success.

Besides, any writer would be foolish to let one perhaps offhand remark tombstone an entire career.
Posted by Chris Rodell at 4:01 PM

Aaand again, I must remind, it's all subjective. What doesn't work for one agent, may for another, Chris. Maybe it's time to revise the query. If you'd like me to have me a look, I'd be happy to. You can email me.

And phoeey, there's tons of agents out there.

btw--I love the premise of your book. Sounded like a pretty darn good hook you got going on there!